Everything About Fiction You Never Wanted to Know.
Jump to navigation Jump to search
/wiki/Aesopcreator 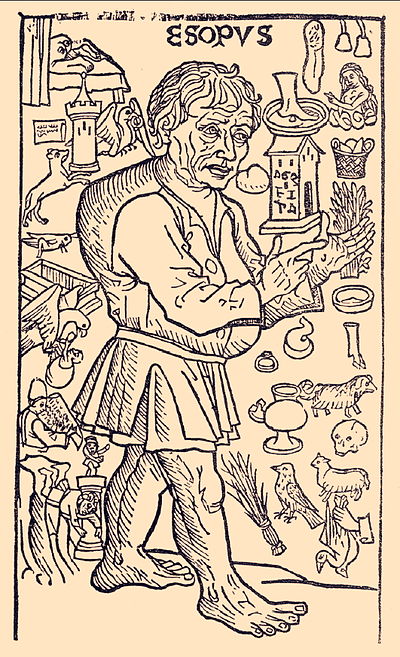 Aísōpos (Greek Αἴσωπος, shortened to Aesop, Esop(e), or Isope in modern English) was a slave, later freedman, living somewhere in Asia Minor in the sixth century BC. If, that is, he existed at all.

Aesop is best-known nowadays as the writer of the Beast Fables called Aesop's Fables... even though none of Aesop's writings have survived to the present day.

What we know about Aesop (assuming he was an actual person) comes from The Aesop Romance, a folk tale that has grown in the telling. Quoting from The Other Wiki: "In The Aesop Romance, Aesop is a slave of Phrygian origin on the island of Samos, and extremely ugly. At first he lacks the power of speech, but after showing kindness to a priestess of Isis, is granted by the goddess not only speech but a gift for clever storytelling, which he uses alternately to assist and confound his master, Xanthus, embarrassing the philosopher in front of his students and even sleeping with his wife. After interpreting a portent for the people of Samos, Aesop is given his freedom and acts as an emissary between the Samians and King Croesus. Later he travels to the courts of Lycurgus of Babylon and Nectanabo of Egypt – both imaginary rulers – in a section that appears to borrow heavily from the romance of Ahiqar. The story ends with Aesop's journey to Delphi, where he angers the citizens by telling insulting fables, is sentenced to death and, after cursing the people of Delphi, is forced to jump to his death."

If you're looking for the supertrope about "the moral of the story", see An Aesop.

Aesop is the Trope Namer for:
Aesop provides examples of the following tropes:

Appearance of Aesop in fiction include:

Retrieved from "https://allthetropes.org/w/index.php?title=Aesop&oldid=1938326"
Categories:
Cookies help us deliver our services. By using our services, you agree to our use of cookies.