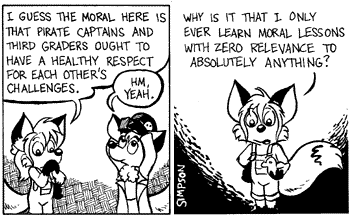 One of the greatest strengths of Sci-Fi and Fantasy is that they can convey real-life situations in a new context by showing everyday problems, humanity's greatest challenges, and even social commentary that's ostensibly free of the prejudices and preconceptions that weigh them down in Real Life, giving us a more detached view of a given problem...as if we were aliens visiting Earth, or rather Earthlings visiting Planet Eris.

However, the Aesops delivered via unicorn or rocket ship sometimes get Lost Aesop or break. In the course of presenting the story the Aesop either gets shoehorned to fit into that world or is arbitrarily discarded. The problem isn't that we can't relate to it. We usually can, because the metaphor is so obvious. The problem is that the deck is stacked, causing one of two problems:

Many of these are a repetition of the old Science Is Bad saw—we can't do it right now and, since our society is the baseline, if we later learn to do it, that would be strange and different and thus bad. IMPORTANT NOTE: Sometimes a writer will put their characters through an interesting dilemma / character development that is only made possible by the fantastic setting, but has no intended bearing on the real world. It becomes a Fantastic Aesop if and only if the author was demonstrably trying to get their audience to learn a moral lesson from this bizarre situation. Think carefully before citing something as an example!

ADDITIONAL IMPORTANT NOTE: Something does not become a Fantastic Aesop simply because it falls apart when interpreted literally; many works introduce or advocate aesops indirectly through allegory, allusion, or symbolism.

Contrast Space Whale Aesop, which is when realistic actions cause fantastic consequences.

Examples of Fantastic Aesop include:

Examples of Type I:

It may be worth mentioning that Riley was in a very dark place at the time, displaying overtly self-destructive tendencies verging on a death wish, and that people paying others to inflict pain on them is definitely not without real world precedent. Moreover, the Kiss of the Vampire trope had been used before -- Buffy being bitten by Angel and William (Spike) by Drusilla were both portrayed as painful at first, then pleasurable.

Retrieved from "https://allthetropes.org/w/index.php?title=Fantastic_Aesop&oldid=1858120"
Categories:
Cookies help us deliver our services. By using our services, you agree to our use of cookies.