Everything About Fiction You Never Wanted to Know.
Jump to navigation Jump to search
/wiki/BABYMETALcreator 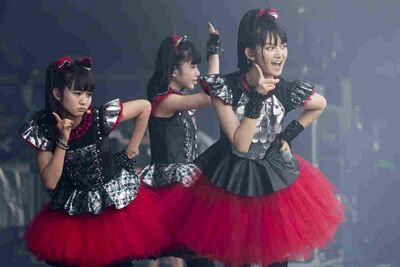 BABYMETAL is a Japanese metal vocal and dance group formed in 2009, consisting of Suzuka Nakamoto as "Su-metal", Yui Mizuno as "Yuimetal", and (up until Fall 2018) Moa Kikuchi as "Moametal", along with a backing group ("The Kami Band") who provide the girls with a solid, skillfully-performed metal foundation while playing in Kabuki garb or skeleton costumes.

The group's core style is a deliberate fusion of that metal foundation and the idol genre, heavily leavened with other musical elements ranging from Trance to Synth Pop to Dubstep to Reggae to J-pop at its most manic. The band defines its style as a new genre called "kawaii metal". Former Megadeth guitarist Marty Friedman has described the band as sounding "like Meshuggah with J-pop on top." Patrick St. Michel from MTV 81 describes their style as a mixture of "...seemingly disparate sounds of heavy metal and idol pop, creating music anchored both by throat-mauling screeches and cuddly choruses." The magazine Metal Hammer described their act using the formula "Short skirts, school girl charm and squeaky voices -- just like in the manga comics. But they mix the whole thing with Metal.".

Originally a subunit of tweenage girl-group Sakura Gakuin, BABYMETAL was created around Suzuku Nakamoto, but was spun off into a separate band in 2013 when Nakamoto graduated from junior high and had to "graduate" from Sakura Gakuin as well. They released their eponymous debut album in February 2014, although they had been circulating tracks since 2010. Their formal debut as a group was at the August 2012 Summer Sonic, one of Japan's largest rock festivals; with an average age of 12 at the time, BABYMETAL was (and remains) the youngest act to ever perform there. During their appearance at the 2013 Summer Sonic a year later, members of Metallica reportedly came to see them perform. In Spring 2014 they gave two concerts at Budokan, making them the youngest female act to ever do so.

In Summer of 2014 they embarked on a world tour, making their debut appearance in the United Kingdom at the Sonisphere Festival 2014. They performed on the main Apollo stage alongside bands such as Deftones, Carcass and Iron Maiden. They played Heavy Montréal 2014 in Canada on August 9 alongside the likes of Metallica, Slayer, and teenage metal band Unlocking the Truth, and also performed at Summer Sonic 2014 in Japan on the Mountain Stage with bands such as Avenged Sevenfold and Megadeth. BABYMETAL was also the opening act for five of Lady Gaga's concerts in her "ArtRave: The Artpop Ball" 2014 tour in August along the western United States. Later that year they returned to England and debuted a new song, "Road of Resistance", a collaboration with Sam Totman and Herman Li of the power metal band DragonForce.

In 2015 they made numerous appearances in Japan and England, including the Download Festival, where they made a surprise appearance with DragonForce. They won a number of awards during 2015 as well, including Kerrang! magazine's "Spirit of Independence" Award, the "Breakthrough Award" from the Metal Hammer Golden Gods Awards, and "Best Metal Artist" from the MTV Video Music Awards Japan.

In 2016, BABYMETAL released their second studio album, Metal Resistance on April 1, and followed it with a new world tour starting in London's Wembley Arena and finishing at the Tokyo Dome. They made their first American television appearance on the April 5, 2016 episode of The Late Show with Stephen Colbert, generating a unique combination of confusion, bemusement and enthusiastic excitement if the reviews and the audience were anything to go by. They also performed with Rob Halford of Judas Priest, who calls them "one of the most unique metal experiences in the world right now ...they've created a very special feeling and experience within the entire world of metal."

In Fall 2018, Moa "Moametal" Kikuchi officially left the band to go solo, although she had already been absent from tours and performances for several months previously.

BABYMETAL provides examples of the following tropes:
Retrieved from "https://allthetropes.org/w/index.php?title=BABYMETAL&oldid=1872385"
Categories:
Cookies help us deliver our services. By using our services, you agree to our use of cookies.