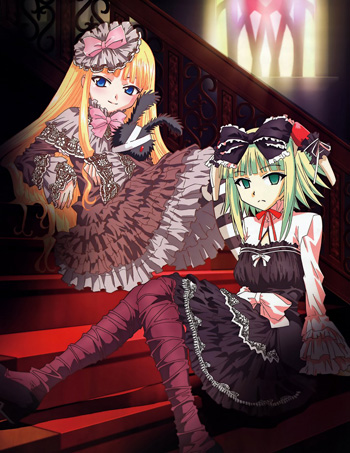 Their outfits need more frills and lace, don't you think?

One-Winged Angels aside (except those that involve the Bishonen Line), everything can be a cute girl.

The Elegant Gothic Lolita wears an outfit that makes her look like a Victorian doll: puffy skirts, lots of frills, bonnets, huge ribbons, often mostly black or otherwise monochrome. There's also shades of Alice in Wonderland (though it is beginning to fall out of favor), with the aforementioned dark motif. On occasion, her hair may be in Princess Curls.

Gothic lolita is actually a sub-style of the "lolita" subculture in Japan based on dressing in EGL as fashion, not costume. The specific Trope Namer is Mana, a Visual Kei artist, who uses "Elegant Gothic Lolita" to refer to his own brand of clothing, Moi-Meme-Moitie. So referring to lolita clothing as EGL is like saying "I'm going to play Nintendo" when referring to video games. "Gothic Lolita" is also referred to as "gothic and lolita", "GothLoli" (gosurori), or "loligoth." Western Goth fashion is referred to as "goth punk" in Japan. A list of the most prominent sub-styles of lolita fashion can be found here.

Keep in mind that although creators might draw inspiration from lolita fashion or intend to show lolita outfits, they might not necessarily make accurate representations or real-life lolitas—who are almost always adults dressing the style for fashion and would be highly offended at any implication of encouraging or endorsing pedophilia.

The Parasol of Prettiness is a common accessory.

Can overlap with a Fairytale Wedding Dress.

It's rare that a trope follows The Wiki Rule, but this one does: Lolita Fashion Wiki .

Not to be confused with Original Gothic Lolita or "OGL".

Examples of Elegant Gothic Lolita include:

Retrieved from "https://allthetropes.org/w/index.php?title=Elegant_Gothic_Lolita&oldid=1958263"
Categories:
Cookies help us deliver our services. By using our services, you agree to our use of cookies.