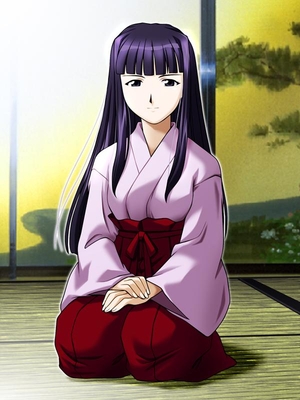 The regal hairstyle worn by many female characters, primarily in Japanese or Japanese-inspired media. The name comes from the Japanese word for princess and is associated with upper class and traditional upbringing.

In its pristine form, the straight black hair endemic to actual, real-life Japanese people is worn long, save for perfectly level bangs trimmed just above the upper eyelids, and straight-cut side locks trimmed to roughly cheek and/or shoulder level, however shorter than the main length. It is widely believed to be the court style of the Heian Period, and thus Older Than Feudalism. Well, Japanese feudalism. The hairstyle is rooted in the fact the Japanese tend to have voluminous sideburns.

The Hime Cut is currently[when?] losing favor among new titles. Styles such as Princess Curls are gaining prominence among anime royalty, and the general populace in Japan is adopting distinctive short cuts or ponytail offshoots, such as Tsundere pigtails.

This hairstyle still has a good chance of showing up if the character is an Ojou or another similar type, like the Yamato Nadeshiko. Also a fairly popular style with mikos. In more modern settings, it's popular with Elegant Gothic Lolita characters. And if it's a Chanbara, its appearance is almost a given, although usually the hair in back is gathered with a ribbon, and sometimes the side locks also. It's also used to accentuate personality traits traditionally associated with the Ojou and similar types: calm, dignified, traditional, elegant, graceful, demure, and modest (or some combination thereof). When listing examples, please identify which character traits the Hime cut is symbolizing or accentuating.

Naturally, any Historical Fiction or Period Piece set between the Heian period and Meiji Revolution will have women in this hairstyle, in which case the cut has little meaning. When listing examples, please mention if the story is set in those times.

Do not confuse with a Gilligan Cut, or any kind of scene change as a cut.

Examples of Hime Cut include: