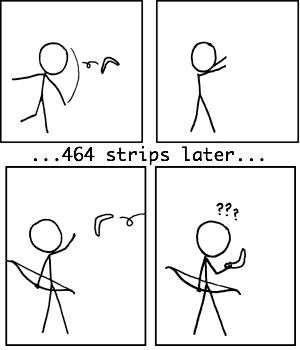 'The Return of the Boomerang' would make a great movie title.

A Brick Joke is a particular type of Chekhov's Gun (or its variants) for which the payoff, but not necessarily the set-up, is a joke. Named after an old joke, which seems at first brush to be a pair of unrelated jokes. At the end of the first joke, a brick is tossed away, leaving the confused listener without a punchline. At the end of the second joke, the brick returns and the listener falls on the floor laughing. For bonus points, the teller can tell an actual unrelated joke in between. Sometimes, the Brick Joke structure—introducing a seemingly irrelevant feature only to return to it much later, after the audience has largely forgotten about it—can be used for drama as well as comedy.

Popularized in early 20th-century Newspaper Comics by Krazy Kat. (Not to be confused with The Cat Came Back, which is nearly the opposite of this trope.)

Overlaps with any type of Chekhov's Gun. Often this can also be a Chekhov's Gag, if the set-up is also a joke.

Compare and Contrast with the Overly Long Gag, where the humor is in how long it takes to get to the punchline. See also Late to the Punchline, which is where a character who doesn't get a joke finally gets it, making it a kind of Brick Joke for that character. The Flying Brick, however, refers to something else entirely. See also Call Back

Examples of Brick Joke are listed on these subpages:
Retrieved from "https://allthetropes.org/w/index.php?title=Brick_Joke&oldid=1775266"
Categories:
Cookies help us deliver our services. By using our services, you agree to our use of cookies.