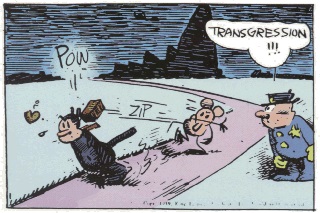 Now you know the basik plot.

One of the klassic newspaper komics of the '20s areas, Krazy Kat was published between the years of 1913 and 1944 in the New York Evening Journal. It was drawn by George Herriman and exhibited surreal, American Southwest-themed artwork and often focused on aesthetics over humor. This kaused it to alienate much of its audience; it only remained in the newspaper as long as it did because it was a favorite of Evening Journal publisher William Randolph Hearst.

The story revolves around the title kharacter and his/her (gender is never set, and strips often switch between the two, sometimes in the middle of one komic) obsessive love with the downright evil Ignatz Mouse, who hates Krazy and loves nothing more than to throw bricks at his/her head. Krazy being, well, krazy, takes this as a sign of love. In the meanwhile, Krazy Kat is actually loved by, of all things, a dog - Officer Bull Pupp, a police officer who is ever vigilant of Krazy and makes it his life purpose to prevent Ignatz from throwing bricks at all, hauling him off to jail when he's kaught in the act.

While the komic never kaught on with a mainstream audience, it remains an influence to kartoonists to this day; Bill Watterson of Kalvin and Hobbes fame cites it as a major influence and featured Kalvin's parents admiring a Krazy Kat strip in a museum in one Sunday strip. Even before then, Ignatz himself went on to be a Mauve Shirt in the Mort Walker/Jeff Dumas vehikle, Sams Strip in the 1960s.

There have been several animated adaptations of Krazy Kat made; none of them were very klose to the source material, however--aside from maybe this one.

This komic strip provided examples of:

The 1963 Animated Adaptation provides examples of:

Retrieved from "https://allthetropes.org/w/index.php?title=Krazy_Kat&oldid=1920814"
Categories:
Cookies help us deliver our services. By using our services, you agree to our use of cookies.