Late to the Punchline 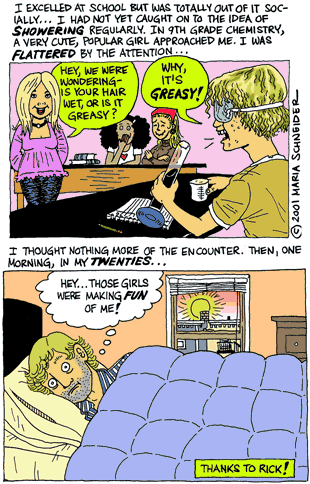 Very, very late to the punchline.

Sometimes it takes a long time for a character to get a joke. Missed in-jokes and Parental Bonus can mean someone gets the joke much later. Or perhaps the character is just slow of mind. At the time the character may not even realize it was a joke.

This trope is what happens when, several scenes, in-universe years, or even seasons after the original joke was told, the clueless character finally understands the joke and gives off a great big laugh about it. Irony makes this especially funny if the actual joke had to be repeatedly explained in the process of all this.

Compare Fridge Logic, Fridge Brilliance, Fridge Horror (those three for this trope as applied beyond the Fourth Wall), Brick Joke (where the punchline itself is late in arriving) No Sense of Humor, Lampshaded the Obscure Reference.

Examples of Late to the Punchline include:

Oooh I get it, the World War II era dictator being referred to was Adolf Hitler! Heh heh heh.

Retrieved from "https://allthetropes.org/w/index.php?title=Late_to_the_Punchline&oldid=1901682"
Categories:
Cookies help us deliver our services. By using our services, you agree to our use of cookies.