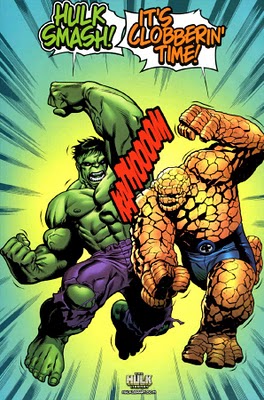 An expression used by a character in numerous episodes of a show. Merely uttering this phrase in the office will key others in to the character you're referring to. For a line to be a catchphrase, it should be always the same, and not just catchy. Note: To be a catchphrase, the phrase must be repeated multiple times—just because something is the most memorable line of a movie does not make it a catchphrase unless it is said more than once.

When everybody gets in on the action, it's a Share Phrase.

By the Power of Grayskull and In the Name of the Moon are forms of Catchphrase, as is Verbal Tic. Beam Me Up, Scotty is a false or oft-misquoted catchphrase. If portions of the catchphrase vary depending on time, location, action, item, etc, then it's a Mad Libs Catchphrase. If the character has a Badass Creed, that will probably double as a catch phrase. If one character is imitating another character, it's a Borrowed Catchphrase; if they get it wrong, it's a Mangled Catchphrase.

See also Arc Words, Catchphrase Interruptus, Flashback to Catchphrase, One-Liner, Phrase Catcher, Stock Phrases, Verbal Tic and Word Power. Also: "On the Next Episode of..." Catchphrase, if you're looking for those said in episode previews to keep the audience excited. If a character appears to be setting up their catch phrase but then says something different, it's a Subverted Catchphrase.

Contrast with Author Catchphrase, which is when a phrase is recycled across unrelated works by the same author/actor/creator. When the audience adopts a character's line as a catchphrase, then we get Memetic Mutation.

Not to be confused with the game show.

Examples of Catch Phrase are listed on these subpages:
Retrieved from "https://allthetropes.org/w/index.php?title=Catch_Phrase&oldid=1823929"
Categories:
Cookies help us deliver our services. By using our services, you agree to our use of cookies.