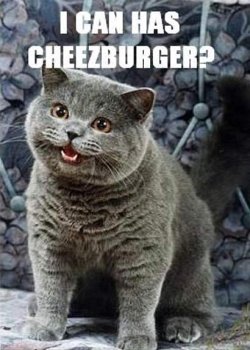 Sure. French Fries and a Diet Coke too?

Sociology notwithstanding, on the Internet, a "meme" (pronounced "meem") is usually described as a catchy derivative of some aspect of pop culture, parodied and repeated to the point that its origins and original meaning become muddled and completely mutilated beyond any point of recognition or humor. It can even be Wrongfully Attributed.

Which means we don't want them in All The Tropes articles, because we are not interested in being muddled, dated, and beyond humor.

Another quirk of memes depends on where they're initially propagated. Memes often spread regardless of content, taste, or sensibilities, while the original source may be the only ones who know enough about the source material to use it ironically. As well, some memes reference something common, but become catchy enough to be associated with only a single new thing.

Depending on how strongly the production company is tied with Fandom, sometimes a meme can escape the internet and get referenced in the medium it parodied through Bonus Material or Popularity Power. When this is the case you get an Ascended Meme. Some forgotten or Discredited Memes are even resurrected thanks to the Popularity Polynomial.

Note that while this article refers to Internet-based memes, the phenomenon is not just limited to the Internet. It can be Sein Language which is that unique blend of terms you and your friends use, or a simple Catch Phrase that is repeated over a billion times. However, certain memes are only popular to a certain group.

If you'd like to keep up with the memes of the day, go to Oh Internet or Know Your Meme, or The LURKMORE Wiki (NSFW), or the fine folks at Encyclopedia Dramatica (Even more NSFW). These are all examples of great resources for the memes themselves and the enigmatic culture around them, but beware the interstitials. You Have Been Warned. On the other hand, if you just want to learn who starts many of these, see Fountain of Memes. These are probably the most common source of Surreal Humor.

The Trope Namer (for the word meme) is Richard Dawkins, who suggested a Mind Virus-like model of society: that cultural information is inherited and reproduced, occasionally with minor mutations, in a similar way to genetic information.

When adding to one of the subpages, please write the meme, then add the explanation of the meme inside a footnote titled "Explanation." [1]

Sub-Tropes and specific variants (add new examples to those pages, not here):

Memes by Medium
Specific Types of Memes and Specific Memes With Their Own Page
Retrieved from "https://allthetropes.org/w/index.php?title=Memetic_Mutation&oldid=1952892"
Categories:
Cookies help us deliver our services. By using our services, you agree to our use of cookies.