The film adaptation of Stan Lee and Jack Kirby's the comic book of the same name. Or rather, it is based on the same general continuity and universe as the original comic with some elements borrowed from Ultimate Fantastic Four.

There were two movies made in the 2000s Fantastic Four movie franchise: 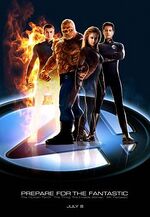 Ten years after the first Ashcan Copy adaptation in 1994, Constantin Films, still holding the movie rights, were confident that such a big project was possible. The result was a $100 million film directed by Tim Story and starring Ioan Gruffudd, Jessica Alba, Michael Chiklis, and Chris Evans as the titular Fantastic Four. The movie explored their origin story and the subsequent battle with Victor Von Doom.

The film was widely publicized with some very high HSQ-laden action-sequences in previews, which caused two main responses to it after the release: one, for those (especially casual moviegoers) who turned up to see the action film, and were disappointed that they got a sc-fi dramedy instead; and a second (especially fans of the comic book), who were disappointed that the sci-fi elements of the original material were toned down in an attempt to make the movie lean towards the action Spectacle. Both sides unanimously agreed, however, that Mike Chiklis' was a brilliant and realistic performance as The Thing; and was easily the best part of the film. And that the soundtrack was pretty awesome.

Had a big box office gross despite its mixed reviews; which led to … 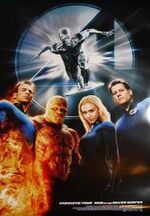 A sequel, which is about...The Silver Surfer, the "herald" for the planet-consuming being Galactus, who in this movie is a giant planet-eating cloud. Loosely based on the Ultimate Marvel Gah Lak Tus Trilogy written by Warren Ellis.

Some reviews rated the film higher than its predecessor, but only slightly. And it didn't make as much money, thus making any further films unlikely. However, there are currently plans to reboot the film series.

Incidentally; the movie brought to light a heartbreaking What Could Have Been story behind the story; that of the 1992 short film featuring the Silver Surfer, which broke every rule in Hollywood's book to even exist, and which was also the first film to utilize the CGI software which would later be made famous for creating the dinosaurs of Jurassic Park.

I'm gonna need to borrow your car.
The transmission sticks!
Not a problem. *toss*

Johnny: (sees the "Dodge" logo on the front) Hemi?
Reed: Of course!

Johnny Storm: I'm sorry, but the doctors just couldn't do anything to fix your face.

Johnny: What I'm saying is, I guess it would just be nice to have someone.
Ben: Well, you got me, kid.

Doom to Reed: What happens to rubber when it's super-cooled?
Reed to Doom: Time for your lesson - Chem 101. What happens when you rapidly cool hot metal?

Johnny: I've been wondering. How do you and Alicia... *clicks his tongue in lieu of finishing the sentence*
Ben: That's none of your business!
Johnny: Okay, okay! I'm just concerned, that's all. I don't want to wake up one morning and find out she was killed in a rockslide!
Ben: I'll show you a rockslide!

Reed: If we're going to identify the source of the mutation, we need to isolate your recombinant DNA so we can activate positional genomes.
Ben: Huh?
Sue: We need to do a physical in order to see what got zapped.
Ben: Oh.

Victor: I have four words. Four little words that can change our lives forever...
Reed: THE CLOUD IS ACCELERATING!