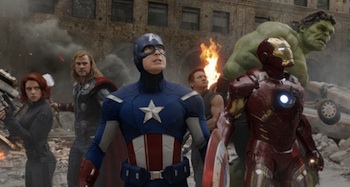 A combined setting occupied by most of the movies produced by Marvel Entertainment (and distributed initially by Paramount Pictures, but now Disney is in charge of that), starting with Iron Man. Unlike in previous Marvel licensed movies, there exists continuity between different movies. Most prominently, the organization SHIELD ties together the different films as a common element.

It should also be noted that Samuel L. Jackson (who plays Nick Fury) has signed an unprecedented movie deal with Marvel Studios, and has so far appeared in every MCU film made.

Initially, the X-Men and Deadpool were not part of this canon, but with Disney's acquisition of Fox they have been brought back into the fold, with MCU appearances by the X-Men hinted for Phase 5 or 6, and Deadpool possibly earlier. For many years neither was Spider-Man, but in 2015 Sony cut a deal to share him with Marvel, and he made his first MCU appearance in Captain America: Civil War. That deal was renewed in late 2020, and for the foreseeable future Spider-Man will remain in the MCU, with the third MCU Spider-Man film slated for release in July 2021. At the end of 2020 the only Marvel characters which remain outside the MCU due to licensing deals are Namor (rights still held by Universal) and Man-Thing (rights held by Lionsgate Entertainment).

For years rumors abound about the repatriation of the Fantastic Four to the MCU, especially after the failure of the 2015 reboot film. Nothing was confirmed for so long that many thought it would never happen, but in December 2020, Kevin Feige formally announced an MCU Fantastic Four film; no release date was given, but it's probably to appear as part of Phase 5.

The MCU has been divided by Marvel Studios into several distinct phases. The exact final number of phases is currently unknown, although industry rumor as of 2019 makes mention of an X-Men/Avengers film planned for Phase 6.

Per the official Phase 4 trailer

Known to be in the works, but no scheduling or major details have been revealed:

Per an announcement made on December 10, 2020, it's possible that some of these will actually be part of Phase 5.

In addition to these shows, there is also Assembled!, a series focused on behind-the-scenes/making-of mini-documentaries for each of the other series, also on Disney+.

There are also several shorts (Marvel One-Shot) released as extras on Blu-Ray:

With the start of the Disney+ series in 2021 these have have been officially decanonized, and are no longer officially considered part of the MCU.

Comic Book Tie-Ins to the MCU

Tropes present across the various movies:

Retrieved from "https://allthetropes.org/w/index.php?title=Marvel_Cinematic_Universe&oldid=1941888"
Categories:
Cookies help us deliver our services. By using our services, you agree to our use of cookies.