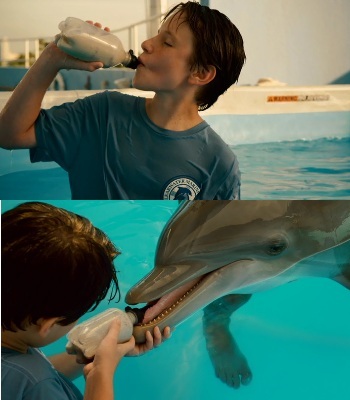 Suppose some animal, or child, or any other character doesn't want to eat what they're being fed; how will you get that food in them, without resorting to Force Feeding? Why, you feed by example, of course!

This is often done to imply that the character in question either didn't trust the food, or in the case of the Picky Eater, just might not expect it to taste good, wherein seeing someone else eat the same thing was enough to change their mind.

Of course, part of the problem with this is that just because some food is good for one creature doesn't mean it will be good for another; among those who take this into account even this approach might not be enough to convince them.

Another variation on this trope would be "so good, the taster eats everything." This is used more in commercials, where a parent might eat the whole jar of baby food instead of serving the child as they started.

Examples of Feed by Example include: