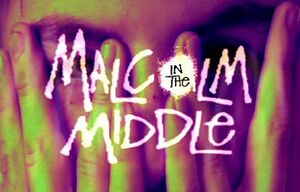 Malcolm in the Middle is a Dom Com which seemingly set out to outdo all existing "dysfunctional family" sitcoms—and did a pretty good job of it.

The titular Malcolm is the frustrated and eternally-perplexed "middle" child of a middle-class home who is discovered to have a genius-level IQ. The show follows his attempts to keep his head down and get through life despite the social stigma of being "smart" and the rest of his family: his sociopathic brothers (whose behavior has rubbed off on Malcolm himself), his emotionally-immature father, and his overbearing and perpetually-stressed mother Lois.

Malcolm had the advantage of being shot film-style rather than in front of a studio audience, and the added freedom allowed it to achieve a tighter pacing and surreal tone more reminiscent of an animated cartoon (although at the worst could also create a frantic, confused mess). Like many more recent sitcoms, it contains no Laugh Track; in fact, Malcolm is considered (along with British sitcom Spaced) by many critics to be the Trope Codifier of the high-quality, single-camera, laugh-track-free sitcoms that viewers take for granted today.

This show is not to be confused with "The Middle" (a 2009 ABC sitcom with a very similar premise).

Tropes used in Malcolm in the Middle include:
Retrieved from "https://allthetropes.org/w/index.php?title=Malcolm_in_the_Middle&oldid=1791711"
Categories:
Cookies help us deliver our services. By using our services, you agree to our use of cookies.