It Will Never Catch On 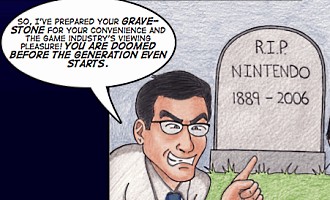 What the gaming community thought before the launch of the Wii.

Anachronisms are funny. As are "prophecies" uttered by people who are in a position to lose a great deal of influence, money or credibility if they are wrong.

The best thing about Alternate Universes is that they have things we can't possibly imagine being true. Why can't the reverse also fit?

Oftentimes, be it a medieval setting or anything else where things we know about have no business existing, something abundantly familiar to our modern audience is put forth as a hypothetical. The punchline is that no one thinks it could possibly be popular, allowing us to laugh at how wrong people's predictions of the future really are, and pat ourselves on the back for being so clear-eyed.

Compare Vindicated by History, Call Forward and Who Would Want to Watch Us?, which is specific to TV shows, and Historical In Jokes that re-interpret the past in terms of the show. Contrast I Want My Jetpack, where our present makes a wrong prediction about the future. Note that this is also Truth in Television, as many things/people that are now legendary were considered potential failures: neither Elvis Presley nor the Beatles got good reviews when they were obscure, and many people couldn't see any use for a home computer. The polar opposite is This Is Going to Be Huge.

People reinventing things that did catch on didn't know It's Been Done. Not to be confused with Hilarious in Hindsight. Contrast Cassandra Truth, where no one believes the dissenting voices who say that some new famous or trendy product, idea or phenomenon is wrong. See also And You Thought It Would Fail - and They Called Me Mad, Who's Laughing Now?

Examples on subpages will never catch on:

Retrieved from "https://allthetropes.org/w/index.php?title=It_Will_Never_Catch_On&oldid=1877531"
Categories:
Cookies help us deliver our services. By using our services, you agree to our use of cookies.