Everything About Fiction You Never Wanted to Know.
Jump to navigation Jump to search
/wiki/The Beatles (band)creator 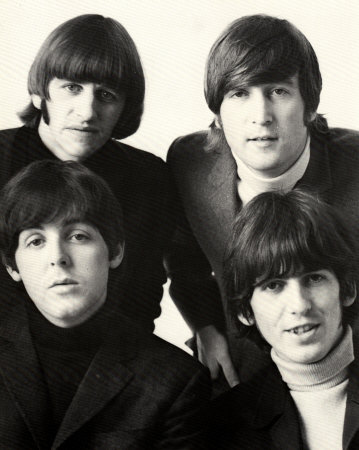 The Beatles are an obscure British band, made up of four lads from Liverpool -- John Lennon, Paul McCartney, George Harrison, and Ringo Starr -- who released some albums in The Sixties, and are credited by many for changing the face of rock music; for others they were at least major pioneers of the new style of pop rock, and a major force of The British Invasion. For many people, they are also the face of The Sixties. Which is not bad work, really.

Sgt. Pepper's Lonely Hearts Club Band is considered by many critics to be the greatest album in history and is credited with really changing the way people listened to pop music; it also has one of the most parodied and homaged album covers in the history of music. The simpler image on the cover of Abbey Road of the band walking in near-lockstep across the street is a close competitor for most homaged cover, as is the half-shadowed band portrait that was used on the British album With the Beatles and its American equivalent/Macekre Meet the Beatles.

The Beatles were the first band in history to make music video equivalents to their own songs, which every musician does now. They played themselves in three fictional films: the pseudo-documentary A Hard Day's Night (1964), the James Bond parody Help! (1965), and the critically-panned surrealist television film Magical Mystery Tour (1967); they were also the subject of the Documentary film Let It Be (1970). Their Celebrity Toons equivalents starred in two very different Band Toons, each with a distinct set of character designs for the Fab Four. Their wacky 1965 Animated Series was the first made-for-TV cartoon based on a real band (or any real people), and therefore both the Ur Example and Trope Maker for Celebrity Toon. Meanwhile, the 1968 feature Yellow Submarine brought kid-friendly psychedelic imagery to the masses.

The band broke up in 1970 under circumstances painful to think about. Everyone went on to solo careers. The dissolution was finalized in 1974, but Apple Corps (the Beatles' management company) was left intact. For perhaps fifteen years, few people saw any purpose for that...

But then a second wave of Beatlemania gradually hit -- too late for John Lennon, who sadly had been getting the Dead Artists Are Better effect since 1980 when he was murdered by a crazed fan, but everyone else got to see it. The events leading to this, in order: the initial release of the British Beatles catalog on CD in 1987; Paul McCartney finally embracing his Beatles heritage fully in 1989, in the process settling the last couple of lawsuits and freeing Apple Corps to act; and most noticeably, The Beatles Anthology in 1995, with Beatles singles "Free as a Bird" and "Real Love" (though the latter Covered Up a Lennon version). Since then, Beatles-related stuff has come out just often enough to keep second-generation fans on their toes and the fandom active and aggressive.

George Harrison died of cancer in 2001. Sir Paul McCartney (he was knighted in 1997 and handled it in a way that ensured no one would let him live it down) and Ringo Starr are still out there touring, doing a bunch of miscellaneous projects, and occasionally making records -- and they both still write good music. Even Pete Best (the band's original drummer before going big) released an album and began touring circa 2008.

The legacy lives on. An installment of Rock Band was made featuring Beatles songs and only Beatles songs. Not quite coincidentally, the entire catalog has been remastered and was re-released on CD the same day.

After years of legal disputes having to do with the "Apple" label, iTunes has added Beatles music in 2010![1]

On December 24 2015, their music became available on most streaming services.[2]

Their complete discography (as available in the 9/9/09 remastered box sets) is:

The Beatles are the Trope Namer for:
The Beatles provide examples of the following tropes:

Retrieved from "https://allthetropes.org/w/index.php?title=The_Beatles_(band)&oldid=1851087"
Categories:
Cookies help us deliver our services. By using our services, you agree to our use of cookies.