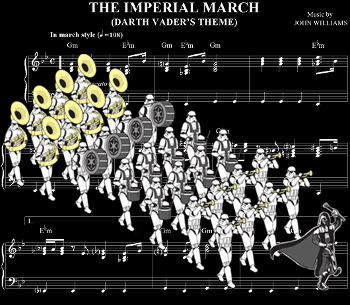 A leitmotif is a piece of music used repeatedly to represent a character, theme, or action. This is a well-established technique used in almost every medium that involves music and story. The leitmotif technique was invented (or at least perfected) by opera composer Richard Wagner in the second half of the 1800s. In his operas, not only would every character have his/her own motif, but also objects, places, and even abstract ideas.

Leitmotifs are often named simply "<character>'s Theme" or "<noun> Motif." They often make up the bulk of movie and anime soundtracks, and a fair chunk of video game soundtracks as well.

This is different from an Image Song in that Image Songs exist only outside of the scope of the show that produced them. Compare with "I Am" Song.

If a character with a distinctive-sounding Leitmotif is in a production or episode that breaks the Fourth Wall, one of his or her fellows may come to make a comment on how loud and annoying their theme music is. (To which the character will almost always reply, "What theme music?") Might be a Musical Spoiler for audiences. The character might also have their leitmotif as their own ringtone, for a subtler joke. See also Left the Background Music On.

If a character's leitmotif starts playing during an action scene, start running.

Can become a Recurring Riff when used throughout a long-running series. In video games, there's also the Battle Theme Music. (If a character's Battle Theme Music is a remix of their Leitmotif, it's a Boss Remix.) Bootstrapped Leitmotif is a variation, where a song that wasn't originally intended as a Leitmotif later becomes one.

Examples of Leitmotif are listed on these subpages:

Retrieved from "https://allthetropes.org/w/index.php?title=Leitmotif&oldid=1932672"
Categories:
Cookies help us deliver our services. By using our services, you agree to our use of cookies.