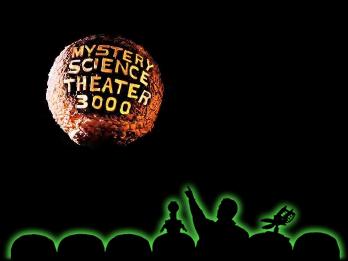 Mystery Science Theater 3000 — MST3K for short — debuted on the local Minneapolis UHF station KTMA (currently CW station WUCW) in 1988. Somewhere between Sketch Comedy, improv, and a late-night movie anthology, MST3K showed some of the worst films imaginable—or at least the kind of crappy B-movies a third-tier UHF station could afford the rights to — intercut with framing sequences following the life of the hapless Joel Robinson (Joel Hodgson), who is stranded on the "Satellite of Love" by mad scientists Dr. Clayton Forrester (Trace Beaulieu, a reference to the hero of the 1953 film adaptation of War of the Worlds) and Dr. Lawrence "Larry" Erhardt (Josh Weinstein). During the movies, Joel is joined by Crow T. Robot (Beaulieu) and Tom Servo (Weinstein), two robots he'd contrived from spare parts, and the trio would mercilessly riff on the comically low quality of the films they watched. (Joel and The Bots were portrayed in "Shadowrama" as if they were sitting in the front row of a theater showing the movies.) The show was partially aimed towards a young audience, which made the riffing generally good-natured, unlike the bitter sarcasm of (for example) the Medved brothers of Golden Turkey Awards fame.

MST3K quickly achieved cult status; after one season, the show was picked up by the fledgling Comedy Channel (now Comedy Central). Although the riffing was a lot more sophisticated—it was now written in advance, rather than improvised—the show never betrayed its low-budget roots, featuring production values which deliberately mimicked the string-powered pie plates and papier-mache aliens of the films it mocked. After the first season on Comedy Central, Weinsten left; he was replaced by the big-voiced Kevin Murphy (as Tom Servo) and the generally big Frank Conniff (as TV's Frank, who became Dr. Forrester's hapless sidekick). With this cast in place, the show hit its stride and ran for six more seasons, eventually spawning a feature film. During the fifth season, Joel left and was seamlessly replaced by head writer Mike Nelson.

The film proved to be a stretch too far, however: it not only drove out original cast member Trace Beaulieu, but also led to the show's cancellation. After a period of uncertainty, MST3K was sold to the Syfy, where it ran for three additional seasons and went through further cast changes. (By the end of the show's run, none of the original KTMA cast remained on the show.) MST3K ended in 1999, but for contractual reasons, it was rerun in random time slots until 2004.

Several episodes were repackaged for syndication in a trimmed-down version known as "The Mystery Science Theater Hour", with new framing segments parodying the introductions used by classic film channels. In general, MST3K did not lend itself to commercial exploitation; each episode ran for two hours (with commercials), and the production team struggled to obtain and keep the rights to the films it riffed. As a consequence of these issues, MST3K was barely broadcast outside the US and remains unknown in large parts of the English-speaking world. Season Three featured numerous Gamera movies, which were removed from further distribution after Sandy Frank (who had imported and dubbed the Gamera films) lost the rights to his dubs and the original Japanese studio, Daiei, refused to sell them for mockery—well, until Shout! Factory got the rights to release them. Shout Factory's new license resulted in DVD releases of the Gamera films, as well as a special volume of MST3K's Gamera episodes. (The show's Godzilla episodes are also out of distribution, but no new deal appears to be in the works to get those episodes released.)

In the years since the show's end, distribution rights to many of the riffed movies reverted to their original owners, which means episodes of MST3K featuring those films can't be redistributed (legally, anyway). For several years, Rhino Entertainment released episodes on video and DVD; in 2008, the DVD rights were transferred to Shout! Factory, and the Rhino releases slowly went out of print. Most of the episodes released on DVD are available for streaming/rental from Netflix.

The series' philosophy of "Keep Circulating the Tapes" (a phrase found in the credits) led to much of the show being easily found online; Best Brains encourages tape trading and file sharing, and the group uploaded numerous MST3K episodes onto Google Video themselves.

The handling of the series by Comedy Central and the Sci-Fi Channel remains a cause of irritation amongst fans even today; one widely circulated conspiracy theory says the network (either one) intentionally sabotaged the series, since the show had a small but intense cult following which made the show hard to dismiss despite its modest Ratings. The odd choices of sponsors tends to underscore this idea in the minds of many fans.

Several fan-made recreations of the series were created as a result of the show's fandom; the most notable is Incognito Cinema Warriors XP, which debuted in 2008 (almost ten years after MST3K was cancelled). The show was originally done as an experiment by the actors/writers to gain film experience, but when the show's debut was well received, they kept producing new episodes (and raised the production values, to boot). ICWXP has gained its fair share of praise from former MST3K cast members (including, most notably, Mike Nelson). The show has also inspired other parody series, including Unskippable , which applies the Mystery Science Theater 3000 treatment to video game cutscenes.

For obvious reasons, the movies shown on MST3K embody damn near every trope, cliché, and hackneyed plot device ever invented—which Joel/Mike and the 'bots would mercilessly call out.

For a list of the films they've shown, see Mystery Science Index 3000. For details on the episodes themselves, check out the Episode Recaps.

Retrieved from "https://allthetropes.org/w/index.php?title=Mystery_Science_Theater_3000&oldid=1822741"
Categories:
Cookies help us deliver our services. By using our services, you agree to our use of cookies.