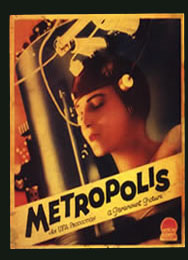 Silent German Sci-Fi film from 1927, directed by Fritz Lang. Considered one of the forerunners of the genre and one of the most expensive films ever made.

It tells the story of a society divided in two, the workers on the underground and the wealthy on the exterior, how Freder, the son of the supreme ruler of the city, falls in love with a worker named Maria and the class confrontation between them fueled by Rotwang, a Mad Scientist rival of Freder's father Fredersen.

Aside from its progressive storytelling, it is also known for being heavily fragmented, the results of both heavy Bowdlerization in its trip to foreign markets, and of poor preservation techniques back in the '30s (plus a little thing called World War II).

Up to 25% of the original footage was considered lost before turning up in a museum in Argentina in 2007, albeit in inferior picture quality. The rediscovered footage was cleaned up as well as possible and integrated into the existing restored footage. The rediscovered version also confirmed the exact running order of shots, which in previous versions could only be guessed at. This new version runs only about five minutes short of the original 1927 German cut, as opposed to nearly an entire hour shorter in some versions. Unfortunately, two scenes still remained too badly damaged to restore, and were replaced by title cards. It made its big US debut at the Turner Classic Movies festival in 2009 and on television on Turner Classic Movies in November 2010. This nearly complete version was released on DVD and Blu-Ray in late 2010.

This Troperiffic film is either the Trope Codifier or possible Ur Example for approximately 65.4% of science fiction tropes. Not to be confused with the anime film of the same name, which is Suggested By but not adapted from it.

Also notable is the 1984 color-tinted restoration by composer Georgio Moroder, which is only available on VHS and LaserDisc due to its controversial 80's pop soundtrack. Until now, anyway. Moroder's version is now available on Netflix instant streaming (alongside the full restored cut), and a DVD/BD release is soon to follow. In the UK, a 2-hour cut of Metropolis is available for streaming on Love Film.com .

Works it has inspired:
Trope Codifier, or Ur Example for the following sci-fi movie conventions: 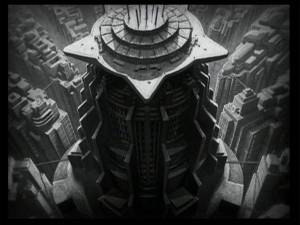 Consequently, many find that Metropolis Is Unoriginal: This movie's tropes, characters, visual style, and special effects have been mimicked to the point of exhaustion. Ironically, on its release people criticized the plot for borrowing heavily from Victorian melodramas and other sci-fi stories; H. G. Wells in particular felt he'd been plagiarized. So some of it may be even older than people think.

Tropes used in Metropolis include:
Retrieved from "https://allthetropes.org/w/index.php?title=Metropolis&oldid=1690987"
Categories: