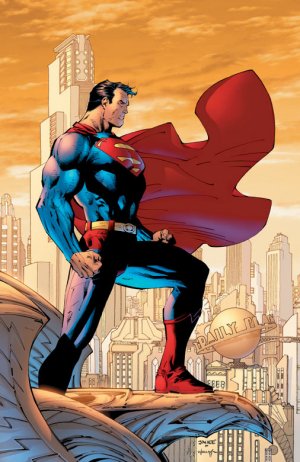 The Last Son of Krypton. The Man of Steel. The Man of Tomorrow. The Big Blue Boy Scout. The iconic Cape. The original Flying Brick. The Superhero.

While not quite the first superhero, he is certainly the Trope Codifier. Has been published continuously by DC Comics for almost 80 years. He first appeared in Action Comics #1 (June, 1938).

On the technologically advanced planet of Krypton, scientist Jor-El discovers that his planet will soon be destroyed by natural disasters. No one will believe him, however, and in a desperate attempt to save what can be saved, Jor-El builds a small rocket vessel to carry his infant son, Kal-El, to a different planet -- Earth. Because Kryptonians physically resemble humans in every way, the boy can blend in without being seen as alien.

As Krypton explodes, baby Kal-El is sent to Earth without any knowledge of his real identity. He lands outside of the rural town of Smallville, a small town in Kansas (although it wasn't too clear originally -- see Wikipedia for a full list of canonical locations). The baby is adopted by Jonathan and Martha Kent, who name the boy Clark, give him a loving home and teach him right from wrong.

However, Clark turns out to be different from humans after all. Kryptonians had evolved to absorb and store solar energy. While on Krypton, which orbited a relatively low-heat Red Giant (or in some versions Red Dwarf) star, their physical abilities were about identical to humans. When exposed to the rays of Earth's much younger, brighter yellow Sun, Clark learns that the surplus of energy gives him incredible powers, which increase as he grows up. Deciding to use his power for good, Clark puts on some spandex (or indestructible Kryptonian uber-cloth, Depending on the Writer) and fights crime as Superman! (Or at first as Superboy, in the Silver Age version of his origin). When not fighting evil, he masquerades as a mild-mannered reporter for a great metropolitan newspaper, The Daily Planet, which helps him find disasters and emergencies that much sooner.

Naturally, the Clark Kent/Superman dichotomy has been explored a great deal and has changed over time (with Kent going from nervous, geeky klutz to sharp-witted Intrepid Reporter, among other changes). In the Golden and Silver Age, Clark Kent was little more than a facade for Superman. After Crisis on Infinite Earths, this idea was reversed. Nowadays, Depending on the Writer, either Clark Kent is the "real" person and Superman the façade, or both people are equally valid and natural aspects of his personality. Both sides also tend to be a lot more psychologically/emotionally vulnerable than you'd expect. Given his powers, and the usual stereotypes about strength of his level, it would be easy to mistake him for a simplistic oaf; but Supes is actually quite a complex guy.

Aside from fighting crime, much of Clark's personal life is explored in relation to his supporting cast from the Daily Planet, his hometown of Smallville, Kansas, and his beloved home city of Metropolis. Possibly the most famous supporting cast of any superhero, it consists of a large number of changing characters, the fixtures of which are: his doting parents Jonathan and Martha (aka "Ma and Pa") Kent, who continue to support and advise him throughout his adulthood (or Pre Crisis, throughout his childhood and teen years, before dying shortly after Clark's high school graduation); his gruff, hot-tempered, long-suffering boss, Perry White, who gladly accepts Clark's constant disappearances and eccentricities as long as he comes back with a headline story; his best friend (in both identities) Jimmy Olsen, a young cub reporter/photographer with a wildly fluctuating age, the highest Weirdness Magnet rating in the DC universe and the unique gift of a signal watch he can use to call Superman anytime he gets into trouble; his short-tempered, stubborn teenager of a cousin Kara Zor-El alias Supergirl, who also survived the death of their planet but arrived on Earth several decades later and has a hard time adapting to her new home and finding out what kind of woman and hero she wants to be; and most importantly, his sharp-tongued, recklessly determined go-getter of a reporting partner (and longstanding object of his affections) Lois Lane, who was desperately in love with Superman but who always dismissed the mild Clark Kent. However, she would eventually fall for Clark, not Superman, before learning they were the same person and marrying him.

Originally created by two sons of Jewish immigrants, who, after several tries, finally got him published in Action Comics #1, where he immediately took off; imitations of him pretty much created The Golden Age of Comic Books.

This wasn't their first attempt at the character they had in mind. Ironically, he was intended as a villain with superior mental powers (also ironically looking a lot like Lex Luthor, Bald of Evil and everything) but when that concept flopped they revisited the idea by exploring the real idea of a "Super"man and in collecting their ideas it formed the now famous "Faster than a speeding bullet, more powerful than a locomotive..." pitch.

One prototype Superman comic was written by Siegel and Schuster in 1936. It depicts Superman rescuing innocent hostages from kidnappers. This pre-dates Action Comics #1 by nearly three years.

His powers include Super Strength, Super Speed, Flight, X-Ray Vision, Heat Vision, Freeze Breath, Nigh Invulnerability, Super Senses, and possibly others, depending on the interpretation.

On the Sliding Scale of Idealism Versus Cynicism, he and the series he stars in almost universally tends toward the idealistic side, being the iconic Cape.

Along with Batman and Wonder Woman, he's one of the Big Three of The DCU. He has also been a member of the Justice League of America on and off (mostly on) since its founding.

TV series where he's part of an ensemble cast:

Other versions of the character:

Parodies of the character:

See also Supergirl, his Distaff Counterpart, and Krypto the Superdog, a 2005 cartoon based off the adventures of his Kryptonian dog.

Also worth mentioning: It's a Bird... by Steven T. Seagle, which is a meditation on the Superman mythology through the eyes of someone who's been tasked with writing new installments of the series, and isn't sure he can do it because he doesn't feel anything in common with Superman. Then he really begins to think about the whole thing...

Superman is the Trope Namer for:
The following tropes are common to many or all entries in the Superman franchise.
For tropes specific to individual installments, visit their respective work pages.
]
Retrieved from "https://allthetropes.org/w/index.php?title=Superman&oldid=1929053"
Categories:
Cookies help us deliver our services. By using our services, you agree to our use of cookies.