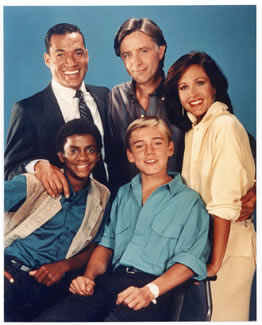 Silver Spoons was a sitcom which ran from 1982 to 1986 on NBC before wrapping up in first-run Syndication in 1987. It is best known for launching the careers of three young actors: Ricky Schroeder, Jason Bateman and Alfonso Ribiero.

It revolves around young Ricky Stratton meeting his wealthy father for the first time, when the latter moves in.

Don't mistake this with Silver Spoon.

Tropes used in Silver Spoons include:
Retrieved from "https://allthetropes.org/w/index.php?title=Silver_Spoons&oldid=1200816"
Categories:
Cookies help us deliver our services. By using our services, you agree to our use of cookies.