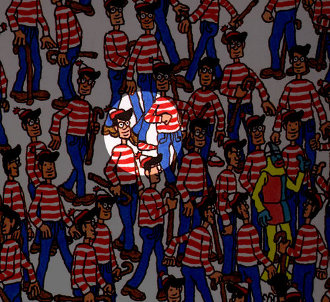 Hey, I've seen that guy with the striped shirt somewhere before...

There is a certain class of actor who you may rarely notice but often see. They appear in various works, filling their roles faithfully but when you notice them individually, you remember seeing them before but never where it was and you can never say their name but are forced to just exclaim "Hey, It's That Guy!"

For instance, if a middle-aged character actor gets a good rep—there is nothing like personal connections in a crowded, cut-throat business like the Hollywood acting pool—he can appear in numerous movies and TV shows each year. Ronny Cox is a good example among actors always available as white male authority figures, Lou Gossett as black male establishment types of any social class, Mako in any middle-aged male role requiring an Asian (er... while he lived, anyway), and Tim Curry as any evil, bearded bloke who dies in the end.

They never get the lead but that's often best for them. That means that nobody ever blames them if a movie bombs and they never become unaffordable. It means that they'll never grab the headlines or grab your attention but they'll grab the paycheck at the end of the day.

Another excellent category for this trope is dwarfs: there are only so many good, trained adult actors just over three feet tall and even fewer with the connections to constantly get speaking parts. Most long time movie and television fans will recognize a half-dozen familiar faces on small bodies: Billy Barty, who played these roles from the 1930s to the 1990s (180 entries just in the IMDB, beginning at age five!), Billy Curtis (High Plains Drifter), Warwick Davis (Willow, the Leprechaun and Harry Potter films, and Prince Caspian), Peter Dinklage (also Prince Caspian, Elf, Game of Thrones) the great Michael Dunn (Ship of Fools and The Wild Wild West), and Danny Woodburn (Mickey Abbott on Seinfeld, Big Figure in the Watchmen movie).

If you're watching Law and Order or other Clueless Mystery, it might result in Narrowed It Down to the Guy I Recognize.

Voice actors in Animated Shows, as well as live action voice dubs for foreign-language shows, have the similar syndrome Hey, It's That Voice!.

American stunt performers, particularly ones that belong to minority groups, tend to keep popping up in a variety of different TV shows and movies. James Lew, Al Leong and Jeff Imada are just three examples that spring quickly to mind. They often play Evil Minions but may sometimes be upgraded to The Dragon or even the Big Bad.

Young Canadian actors, particularly if they're Toronto-based, have this happen so much it gets its' own trope, because teens more than any other group show that there are Only So Many Canadian Actors.

If you can't quite remember which show the actor was in, it can result in much time spent on IMDB, trying to narrow down where else the viewer has seen that actor. If you get stuck, try You Know That Guy—someone might help you.

Compare Actor Allusion, You Look Familiar, You Might Remember Me From, Hey, It's That Voice! and Plays Great Ethnics. Inverse of Retroactive Recognition. Parent trope of What the Hell, Casting Agency?. When you just can't shake off the image of the older roles, it's Role Association.

Hey It's That Guy!, now in convenient book form

Examples of Hey, It's That Guy! include:
Retrieved from "https://allthetropes.org/w/index.php?title=Hey,_It%27s_That_Guy!&oldid=1823684"
Categories:
Cookies help us deliver our services. By using our services, you agree to our use of cookies.