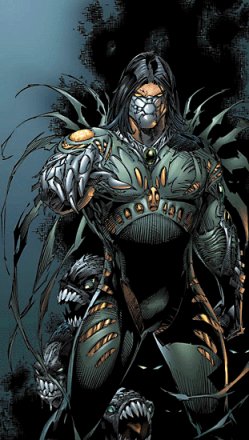 And this is when he's NOT pissed off.

What do you get when you cross a well-dressed mafia hitman with an ancient demonic power that gives him the ability to summon tiny foul-mouthed gremlin thingies to do his bidding?

A whole lot of Badass, that's what.

The Darkness was one of Top Cow Productions' crown jewels of the 1990s' Darker and Edgier trend, created by Marc Silvestri, along with some assistance from Garth Ennis (who wrote the first comic arc) and David Wohl. The hitman in question is known as Jackie Estacado, adopted son of don Frankie Franchetti, and from the first few panels of the first issue, was obviously not disturbed by the lifestyle into which he had been brought, and actually relished it. However, as soon as his 21st birthday came to fruition, he inherited the evil known as the Darkness, which granted him abilities beyond his wildest blood-spattered dreams, the most infamous being the Darklings, the aforementioned little gremlin bastards that act somewhat as his multiple tiny alter-egos that are mostly interested in spouting off politically incorrect commentary and humor, but can disembowel an enemy at a moment's notice if Jackie commands it.

Jackie's enemies consisted of not only rival families, but other supernatural beings in the Top Cow Universe that had axes to grind with the Darkness itself, or just happened to cross paths with him at some point or another. Among them were Lara Croft, Witchblade and the Magdalena. His main foe was the Angelus, basically the antithesis of the Darkness, being a female entity and born of light, it wants to eradicate Jackie at any turn, and innocent casualties are of no concern to it.

The series itself has a pair of Video Games, as well as an upcoming Live Action Adaptation that is on the fast track, which is being directed by The Pang Brothers, and rumored to be starring Channing Tatum as Jackie himself.

Not to be confused with the zany British hard rock band of the same name.

Tropes used in The Darkness include:

random security mook: You may dump in peace.

"We used to have honor in this Family. Codes!"

"Wenders, this is Darkus."
"THERE'S A DEMON IN MY PANTS!"

Darkling: It's been so long since I've had decent Italian.

Jackie (to Appolonia): You know, you didn't have to kill your cat just to prove you're a ruthless bitch.

Jackie: You know what? I'm starting to like you.
Kirchner: But you're still going to kill me.
Jackie: Oh, yeah.