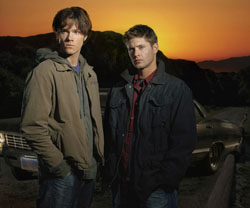 Supernatural is an incredibly Angst-heavy show based around a Monster of the Week structure topped off with an over-reaching arc, while simultaneously retaining humor through various means of Leaning on the Fourth Wall. It features Dean (Jensen Ackles) and Sam Winchester (Jared Padalecki), two brothers who hunt creatures based on Urban Legends, Classical Mythology and Judeo-Christian theology. The first season featured the brothers searching for their missing father, but, for the most part, the series features them Walking the Earth as they travel from town to town in search of supernatural problems to solve. It uses a diverse score of classic rock songs that feature heavily throughout, to encapsulate the gritty rock-and-roll life they lead, and features Dean's 1967 Chevy Impala as almost a third character.

It originally aired on The WB, but moved to The CW after The WB folded.

A Spin-Off Web Original named Ghostfacers, centered around a pair of minor recurring characters from the series, was launched during Season Five, in conjunction with the show's 100th episode. Madhouse got the rights to make an anime adaptation of this show. You can look at the animation in action in this trailer. The American release of the first season of the anime came out on July 26, 2011.

The show somehow managed to last fifteen seasons, despite originally having planned only five, continuing long after the original showrunner abandoned the production after the fifth season. The series concluded on November 19, 2020, with 327 episodes aired.

There is an in-progress Recap page here.

Not to be confused with the 1977 BBC series of the same name.

Tropes used in Supernatural (TV series) include:
Retrieved from "https://allthetropes.org/w/index.php?title=Supernatural_(TV_series)&oldid=1868894"
Categories:
Cookies help us deliver our services. By using our services, you agree to our use of cookies.