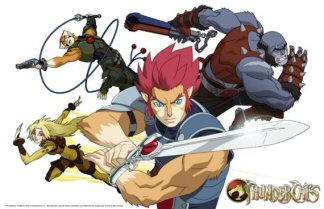 ThunderCats is a 2011 reboot of the 1985 animated series of the same name. The series follows a group of alien cat-people from the Kingdom of Thundera on the planet Third Earth. Led by the young King Lion-O, they travel in search of artifacts that can defeat a re-awakened enemy from the ancient past, the evil sorcerer Mumm-Ra. It's produced by Warner Bros Animation and animated by Japan's Studio 4°C. It received an hour-long premiere on Cartoon Network on July 29, 2011. Click here to watch the official trailer.

Has a wiki here.

Tropes used in ThunderCats (2011 series) include:
Retrieved from "https://allthetropes.org/w/index.php?title=ThunderCats_(2011_series)&oldid=1854457"
Categories:
Cookies help us deliver our services. By using our services, you agree to our use of cookies.