Everything About Fiction You Never Wanted to Know.
Jump to navigation Jump to search
/wiki/Yoshihiro Tatsumicreator 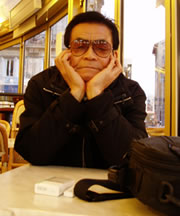 The man who coined the term Gekiga. Born on June 10, 1935, Tatsumi grew up in Japan after World War II and during the growth of Manga. His love for comics, both writing and drawing them, was strong even in his youth, and he started out as many did by drawing postcard Yonkoma. After meeting and speaking with his inspiration, Osamu Tezuka, Tatsumi began to work on longer projects such as an omnibus. The political, financial and moral strife of post-WWII Japan eventually inspired him to write darker comics about the normal everyday man. Wanting to differentiate this new style from the happier and goofy manga of the day, he coined a new term, gekiga, and the movement of Japanese alternative comics began.

Yoshihiro Tatsumi has published many short stories in the gekiga style that influenced many, even his great inspiration, Osamu Tezuka. His longest and most extensive work is his autobiographical A Drifting Life, a must-read for those who desire to know about the history of manga.

Tatsumi's works are published in English by the Canadian Drawn and Quarterly.