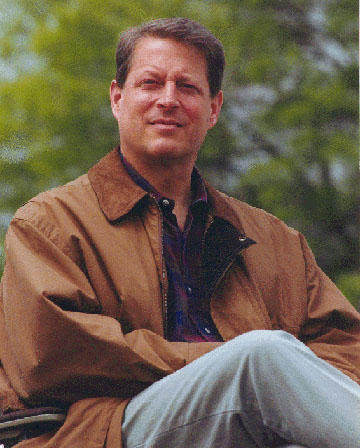 Vice President of The United States under Bill Clinton from 1993-2001. Now an environmental activist, whose Documentary An Inconvenient Truth earned him a Nobel Prize. And no, he did not invent the Internet. Mr. Gore has since appeared in other media besides An Inconvenient Truth, such as Futurama and Current TV, a network he co-leads.

Just for added strangeness, Gore was Tommy Lee Jones' roommate at Harvard. And according to author Erich Segal (who attended Harvard at the same time) the hero of his novel Love Story was based on a fusion of the two of them.

Al Gore provides examples of the following tropes:
Retrieved from "https://allthetropes.org/w/index.php?title=Al_Gore&oldid=1883820"
Categories:
Cookies help us deliver our services. By using our services, you agree to our use of cookies.