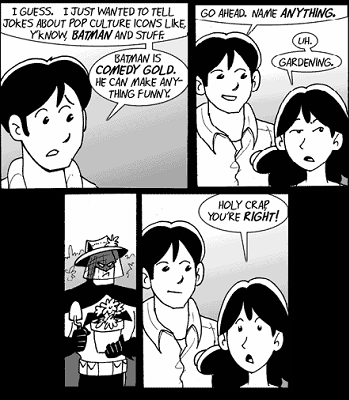 "Even funnier than the man who has been made ridiculous, however, is the man who, having had something funny happen to him, refuses to admit that anything out of the way has happened, and attempts to maintain his dignity."
—Charlie Chaplin

Just because a character doesn't have a sense of humor themselves doesn't mean that they can't make the audience laugh. The Comically Serious is a character who ostensibly has a serious, composed personality, but is funny because he or she is put into funny situations. This works with character types who react calmly to unusual situations, especially those that more realistically induce hysteria or other strong emotions, such as the Deadpan Snarker, The Stoic, and The Quiet One.

Typically works as a Straight Man in the cast, although they may have some odd weakness. Often, they become the victim of Not So Above It All.

Subtrope of Bathos. Also related to Serious Business, as comically serious characters have a tendency to indulge in it. Might also be the Butt Monkey in settings where being serious is seen as an offense.

Compare No Sense of Humor, So Unfunny It's Funny.

Examples of The Comically Serious include:

Christmas is about family and loving people. [Pause.] Now get bent.

You should imitate William the First's loud voice!
Yes sir! I respond Japanese way! Be unclear! Say one thing, but mean something else completery opposite! Lie to them!

Zoro: I have a plan. We play rock-paper-scissors. The loser cuts off his hand.
Usopp: How can you say such a scary thing with a straight face!
Zoro: I'm not finished. Then he goes and gets Chopper to sew it back on.
Usopp: We're not rag dolls!!
Zoro: I have another idea...
Usopp: I don't wanna hear it!!!

Let me try that again.

Nightwing: If you don't want to talk with someone, why do you even have a passenger seat in the Batmobile?
Batman: Balance.

Stryker: Surely, you can't be serious.
Rumack: I am serious. And don't call me "Shirley".

"Don't overlook *my* butt, I work out all the time. And reaping burns a lot of calories."

Colonel: Right! Stop that! Silly! And a bit suspect, I think...

Michael: Are you serious?
Wayne: Almost always. I was once voted the worst audience participant Cirque Du Soleil ever had.

Lal: Then, without understanding humor, I have somehow mastered it.

Data: You must feed him and pet him. And you must tell him he is a good cat. And a pretty cat.
Worf: (holding the cat at arm's length with his usual scowl) I will feed it.
(Beat)
Data: Perhaps that will be sufficient.

Teal'c (deadpan): Undomesticated equines could not stop me.
(Beat)
O'Neill (realizing): You made a joke.

Cas: [completely serious] That wasn't me.

This isn't funny, Dean! The voice says I'm almost out of minutes.

Sasha: My name is Yon Yonson, I live in Wisconsin, I work in the lumberyard there... * Thud*

Marcus: Hey, Colonel! I guess we are the support, huh?

Rikku: Doctor P is in the house!
Paine: Stop that.

Alchemiss: [sarcastically] So how did you spend your sabbatical, Tombstone? Performing in musical theater? Raising puppies?
Tombstone: Animals wither in my presence

Quetzalcoatl [After being turned into a chicken by Green Genie] YOU DISHONOR ME AND MY ANCESTORS.
Green Genie: [Turning him back] Tell me: were you born this dull? Or did you have to go to school to learn it?

V: Fascinating. Durkon, I have just now formulated a theory that encompasses both Nale's most likely method of engagement and the most suitable response on our part.
Durkon: THE TREES BE ATTACKIN'!! RUN FER YER LIVES!!!
V: Ah, I see you have already grasped the core principles of my theory.

"I have ridden the mighty moon worm!"

Bender: You're in a movie? What do you play? A burnt out cop? A streetwise pimp trying to save his little brother from the dark life?
Al Gore: Yes, I play a streetwise pimp. With a hybrid pimpmobile.

Krusty: "Free comedy tip, slick: the pie gag's only funny when the sap's got dignity. (sees Bob) Like that guy. Hey, Hal, pie-job for Lord Autumnbottom there!"

""Listen sir, I am not going to ruin your plans. I'll just walk away...see? Okay...now there's sparks shooting out of my eyes."