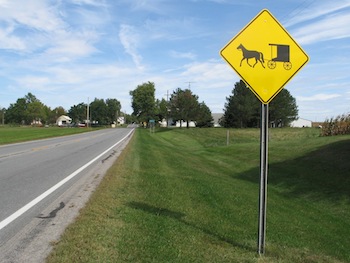 The Amish are a unique people, almost as well-described as a monastic order as a denomination. They are often featured in fiction because their seemingly idyllic lifestyle attracts Wish Fulfillment.

The Amish are a Christian denomination, originally a subsect of the Mennonites who were in turn a subsect of the Anabaptists (or "re-baptizers," because they re-baptized adult converts who had been baptized as infants in the Catholic church or in very early Protestant churches that still practiced infant baptism; children born into the Amish tradition then and now are not baptized as infants, but only after age 16 or more when they make their own profession of faith). The name "Amish" refers to Jakab Ammann their founder. The original Amish were ethnic Germans and to this day they speak a variety of West Central German as their first language, though most know English as well as that is needed for talking to "Fancy Englishchers" (other Americans, also occasionally referred to as "Yankees" - a slightly more disparaging term). They call themselves "Plain Folk" because of the studied plainness of their lifestyle.

The Amish fled from Germany during the Wars of Religion, when Europe was not really a good place for a small and pacifistic sect to live. They settled in the USA at the invite of William Penn, and Pennsylvania is sort of their headquarters, although there are also large populations in Ohio (which has the highest population of Old Order Amish) and Indiana, and smaller communities exist as far away as Ontario, Canada. By now there are almost no Amish in Europe.

Amish beliefs emphasize nonviolence, humility, and community. Their famous deliberate archaism reflects that. New innovations are suspiciously examined as to whether they would harm this and though their criteria for deciding can seem opaque to outsiders, they tend to have explanations that make sense to them. Church organization is minimal and in fact instead of holding services in a Church building they rotate the houses of congregants.

Amish are usually thought of as farmers. But they are also known for their fine crafts which sell at gift shops. In recent times their image has been made famous and slightly commercialized, and cookbooks, antiques and other Macguffins connected to their culture sell well.

See Space Amish for where writers take an Amish-like community and transplant it to a more fantastic environment.

Retrieved from "https://allthetropes.org/w/index.php?title=Amish&oldid=1906170"
Categories:
Cookies help us deliver our services. By using our services, you agree to our use of cookies.