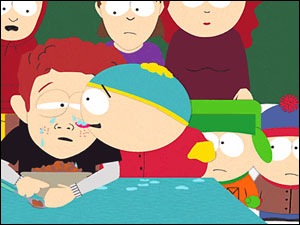 This Jerkass will literally feed off your misery.

A Jerkass (a portmanteau of "jerk" and "jackass") is a character who is defined by being completely unkind, intolerant, smug and having no regard for anyone's well-being, opinions or else. Technically, they relish in schadenfreude.

Jerkasses come in many shapes and sizes: some don't even bother trying to conceal how reprehensible they are - often times, these types are portrayed as outwardly sanctimonious, bigoted and intolerant of anyone who does things they don't like and tend to be crass, foul-mouthed and unapproachable in general. Others hide their rotten true colors behind a false front of good manners and charm, while indulging in their true behavior more covertly.

When something bad happens to these kinds of characters, the likelihood of it eliciting sympathy for them is very slim. More often than not, it'll be seen as well-deserved Laser-Guided Karma if the character makes no effort in trying to correct their behavior. This makes them being on the receiving end of the Humiliation Conga or being an Asshole Victim all the more cathartic.

Another defining trait of the Jerkass is their complete lack of self-awareness and a deliberate ignorance to what other people really think of them. Most of the time, they genuinely believe that only they're right and have an immense stubbornness about admitting their flaws, unless doing so would make them look better than others. More often than not, these characters are mostly, or entirely devoid of compassion.

If they're ever called out, expect them to reject it and trivialize it before continuing to do their thing. When exaggerated, this kind of behavior can devolve into sociopathy.

Many villains, bullies and Hate Sink characters tick every box for this trope.

No real life examples, please; We do not wish to have any Flame Wars erupting here about the matter and many Jerkass attitudes in Real Life tend to be rather subjective. Not to mention that some people that call out someone as a Jerkass tend to do it in a Jerkass-like attitude themselves, and that just makes our heads spin.

Examples of Jerkass are listed on these subpages:
Retrieved from "https://allthetropes.org/w/index.php?title=Jerkass&oldid=1825746"
Categories:
Cookies help us deliver our services. By using our services, you agree to our use of cookies.