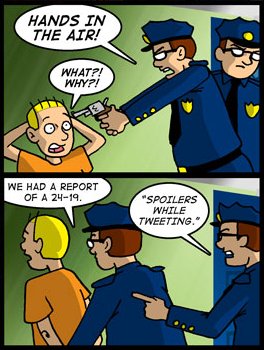 You know who else gave out unwanted spoilers online? Hitler!

This trope is when somebody does something wrong, but it's a mild wrong, like a white lie, a low misdemeanor (as in a $20 fine), or something that at most gets a "Hey! Not cool!" from your friends, and then the show treats it as crossing the Moral Event Horizon, or at least coming dangerously close.

That candy bar you shoplifted? Those 50 cents it cost will land you about 50 years in prison! You're scum! How could you! The store owners will starve because of you! I hope you can live with yourself!

This trope comes in four varieties:

Since laws all over the world are rife with Values Dissonance, things that are misdemeanors or not even illegal in one country but treated as serious crimes in others can seem like this.

Examples of What Do You Mean It's Not Heinous? include:

Retrieved from "https://allthetropes.org/w/index.php?title=What_Do_You_Mean_It%27s_Not_Heinous%3F&oldid=1914752"
Categories:
Cookies help us deliver our services. By using our services, you agree to our use of cookies.