One of the world's southernmost countries, Argentina is one of the countries with a sun on its flag.

Argentina can be noted as an incredibly diverse country, geographically and culturally speaking. It has a wide range of ecosystems and biomes, ranging from deserts to huge mountains, forests, jungles and glaciers.

For some time a strong ally of the USA, it has been less of one in recent years.

At the global level, the most notable recent event in Argentina was the 1982 war over what the Argentines call Islas Malvinas. The British call them the Falkland Islands. The British won handily, which put an end to the last desperate attempt by the military junta, that had seized power after Peron's death, to stay in power. This final blow helped reestablish democracy the next year... which still has never assuaged the Argentinians' feelings of humiliation about the loss. (It is worth noting however that the Falklands dispute is very much the exception to the rule; for most of Argentina's history since independence, Argentina was one of the most friendly South American countries with Britain. The current President, Cristina Elizabeth Fernández de Kirchner, is Argentina's second female President (although the first one elected as such) and directly succeeded her (now late) husband. She was reelected with an overwhelming majority of the votes.

At the national level, the country has been on an endless economic roller coaster ever since The Great Depression started a cycle of catastrophic busts and phenomenal booms, mixed with a healthy share of coup d'états. The overall effect is that growth per capita has stagnated since WWII, making Argentina something of a conundrum to economists. The economic pressure Argentina has to deal with today is composed greatly by huge international debts (special mention to the many particular debts that were nationalized by the government after the last dictatorship).

The XX century was for Argentina a very difficult time; it ranged from various dictatorships, to brief periods of democracy and economic regrowth, followed by terrible economy busts (most notably the years 2001 and 2002) thanks to economy methods that didn't suit the rhythm of the country and the current world market (but they did in the turn of the XIX century, the main reason people thinks it should work today). The end result is that almost uniquely amongst all the countries in world, the last 100 years are something of a lost century to Argentina: at its start, they were easily among the richest and most developed countries in the world (no kidding, they were on par with the US and the most developed countries of Europe); at it's end, they had "regressed" into a developing country, pretty much on par with their Latin American neighbors.

Still, as of recent years, Argentina has managed to recover from 2001-2's crisis and has had a somewhat noticeable economic growth overall, at the cost of having very high (20+, extra-officially, since the government has been massaging the official indexes for a long, long time) levels of inflation again.

Argentina's most famous cultural innovation is the tango. Originating from the dock areas and brothels of Buenos Aires, it has become a global dance.

The country is known for its meal, and Argentinian Steak Restaurants are commonplace. One way of preserving the beef for export was to pack it in coarse-grained salt, known as "corns" of salt, hence "Corned Beef". Which means very different things in Britain and America.

During the 19th Century and early 20th, there were at least two great waves of immigration, mainly from Italy (contributing around 2.970.000 people) and Spain (contributing around 2.080.000 people). Argentina also contains a community of around 20,000 Welsh speakers, descended from colonists who were given permission to settle in Patagonia in the 1860s and largely stayed put, creating a "little Wales far from Wales". Also, through centuries people from neighboring countries have migrated to Argentina, mainly from Bolivia, Paraguay and Peru, because as we mentioned above, Argentina have historically combined quite a few traits which made it one major country in terms of economy, technology, science and education in South America, and arguably the best in Human Development Index in all Latin America.

And just for you to know, this is not the only place where nazis escaped to after WWII, and its far more exaggerated in the media than what it actually occurred. Also, Villa Gessel has no mountains. It´s a seaside city in the east of Buenos Aires, while the big mountains are located in the west of the country, in the Andes.

Two of the most famous non-electoral political figures from Argentina were Juan Domingo Peron's wife, Eva Perón (Evita) on one hand, and Ernesto Guevara de la Serna, far better known as Mr. T-Shirt himself, el Che Guevara, on the other. Juan Domingo Peron was elected democratically, even if he started out as vice president to a dictator.

Argentina is also very well-known in the sporting arena, in football winning the World Cup twice and the Copa América fourteen times. The most famous Argentine footballer is Diego Maradona, most notorious for "The Hand of God"- a goal that was very clearly handball. The country has also produced a five-times F1 champion, the late Juan Manuel Fangio, known as "El Maestro". "Manu" Ginobili has attained NBA acclaim not too long ago, while in tennis the so called "Legion" has been consistently within the ATP Top 50 for more than a decade (Juan del Potro and David Nalbandian being the most notable examples) with Guillermo Vilas' tour-de-force "pioneering" career during the late seventies and early eighties.

Argentina's Great Writer is generally agreed to be Jorge Luis Borges, one of the best and most influential practitioners of the Mind Screw. Not to mention that most of Argentina's other great writers were also good friends of his. Among these were Adolfo Bioy Casares, Ernesto Sabato (some of his conversations with Borges were put together and published in 1976), Silvina Ocampo, and though not a friend of his, Julio Cortazar, author of the postmodern Hopscotch, has stated that Borges was a source of inspiration for his stories, most of which brimming with Magic Realism. In regards to Comic Books, Quino's Mafalda and Oesterheld's El Eternauta are easily the most influential to come out of the country.

In the field of science, Argentina has produced many worldwide acknowledged brilliant minds, and it was an Argentine police officer, Juan Vucetich, the creator of the first fingerprinting system.

In the field of religion, there is Jorge Mario Bergoglio, better-known as Pope Francis - the first Pope from the Southern hemisphere and the first Jesuit Pope. 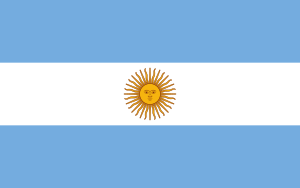 Argentina's flag is a blue-white-blue horizontal tricolour with a solar disc symbol. The same stripes (with a different shade of blue) can also be seen in most Central American flags: some interpretations implied they originally come from sashes and banners used by the Bourbon kings of Spain, and reflect how the Latin American revolutions actually started out as loyalist movements when the throne of Spain was usurped by Napoleon Bonaparte's brother Joseph.