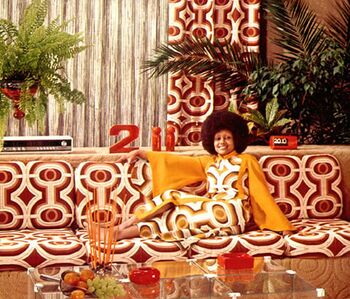 There is no person in this picture.

The Seventies: A time when love was free, peace was the sign of the times and polyester was the fiber of choice. A period in history where the men wear polyester leisure suits, flary pants, huge ties and sport highly sprayed and manicured hair, sideburns included. The women have feathered, Farrah Fawcett hair, and wear slinky dresses with no bras underneath. Black people sported huge, poofy Afros as a Take That to past straightening practices. Heck, even white people had afros if they could grow them. Most people spend at least 92 percent of their waking lives at the disco or behind the wheel of a car big enough to tow the Titanic. Disco music with a tense "waka-chu-waka" beat often plays during chase scenes, or on pornos.

Elsewhere, Western Terrorists (and the Arab ones) are trying to blow up people, the US is still losing in The Vietnam War, and the blockbuster movie is invented, twice.

Media Technology reaches a turning point, as 8-track audio cassettes and VCRs appear for the first time, however the LP and Film are both still king. Movies such as Taxi Driver and The Godfather begin to deal with subjects once considered taboo due to the loosening censorship laws, and pornographic film becomes legal. The world learns the meaning of Kung Fu thanks to a tough little guy from Hong Kong named Bruce Lee. Television is changed forever by such ground breaking shows as All in The Family, M*A*S*H, The Mary Tyler Moore Show, Saturday Night Live and Monty Python's Flying Circus. Meanwhile gentle family shows like The Waltons, Little House On the Prairie and The Life and Times of Grizzly Adams found their own audience while The Fonz was ruling the kid's imagination while giving Robin Williams his big time start as the master comedian in Mork and Mindy. Meanwhile, Star Trek: The Original Series is Vindicated by Cable and develops a sizable fanbase, spawning a juggernaut franchise that would not die for... well, ever. While the kids have made the best of the Dark Age of Animation with Saturday Morning Cartoons like Superfriends and Scooby Doo, they at least had PBS's breakthrough kids shows, Mister Rogers' Neighborhood and Sesame Street in their vibrant glory of its youth before they graduated to The Electric Company, Zoom and The Big Blue Marble.

Punk Rock and Disco, two genres of music which continue to influence music to this day come out during this decade, as does the first primitive electronic music under such bands as the German Kraftwerk and Suicide from New York City. Comics enter the Bronze Age, featuring death, politics, and ethnic superheroes for the first time ever. The Cold War slows down as American and Soviet relations improve for the first time since 1945. American distrust for authority reaches a high point with the Watergate scandal.

The post war economic boom that dominated The Fifties and The Sixties ends in recession, turning the American manufacturing Belt into the "rust belt". Crime and grime are on the rise and respect for law and order - from both criminals and their victims - begins to decline in favour of the good old fashioned "heads blown off" method. The energy crisis has Westerners running out of gas for the first time, showing the world just how dependent we all are on the Middle East.

Covers roughly the period from the Kent State Massacre of 1970 to the inauguration of Ronald Reagan.

See Also: The Roaring Twenties, The Great Depression, The Forties, The Fifties, The Sixties, The Eighties, The Nineties, Turn of the Millennium and The New Tens.

Popular tropes from this time period are:

Examples of The Seventies include:

Works that are set in this time period are:

Works that are made in this time period:

Retrieved from "https://allthetropes.org/w/index.php?title=The_Seventies&oldid=1882111"
Categories:
Cookies help us deliver our services. By using our services, you agree to our use of cookies.