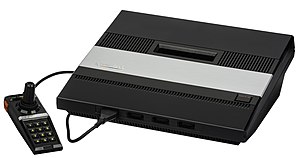 Atari's attempted followup to the 2600, using technology from the Atari 8 Bit Computers.

Although mocked, it did have some good games; many of them came from the Atari 8 Bit Computers library, as the 5200 was nearly functionally identical.

There were two versions of the console released. The first had four controller ports, and had an unusual hookup method in that you hooked the power supply up to the RF switchbox, and then a single cable carried power to the console and the A/V signals to the television. The second version ditched this setup and went back to having separate power and A/V connections, and was also compatible with 2600 games with an add-on, but lost two of its controller ports in the process, and to add insult to injury was incompatible with certain 5200 titles, including its own port of Pitfall.

Retrieved from "https://allthetropes.org/w/index.php?title=Atari_5200&oldid=1933050"
Categories:
Cookies help us deliver our services. By using our services, you agree to our use of cookies.