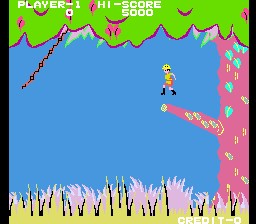 Jungle Hunt is a Side View Arcade Game released by Taito in 1982, and ported to many consoles and computers. It started as a Tarzan game, but a lawsuit from the estate of Edgar Rice Burroughs led to some changes.

You play a guy in a safari outfit (a Captain Ersatz of Tarzan) who has to save his girlfriend from cannibals. You journey through four stages. In the first stage, you swing from tree to tree on vines (called "ropes" after the lawsuit). In the second stage, you swim past crocodiles, stabbing them if you want to for extra points. In the third stage, you run uphill while dodging boulders. In the fourth stage, you jump over the cannibals to rescue the girl.

In Brazil, it was released with the original Tarzan graphics and sampled yell.

Tropes used in Jungle Hunt include: