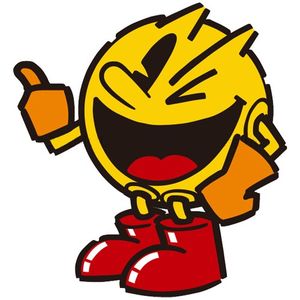 A well-known game developed by Namco (now Namco Bandai) from The Golden Age of Video Games, and one of the most popular games ever, Pac-Man was the first really successful Maze Game, and one of the first games to be popular with both sexes. It sparked a pop-culture phenomenon, and helped drive the early-1980s video game craze. Ironically, its poorly implemented Atari 2600 port helped turn Pac-Man Fever into Pac-Man Cancer. It also was the first video game to get an Animated Adaptation, with a reluctant Marty Ingels in the lead role.

The game depicts an abstract round yellow character vaguely reminiscent of a head with a mouth opening and closing to gobble up nearby objects. The player must steer the character around a maze and "eat" all of the dots and four special power pellets. Four ghosts pursue the character, and their touch is fatal unless Pac-Man recently ate a power pellet.

The original game famously had no random number generator: The ghosts moved through the maze in a completely predictable pattern. It is said that the ghosts were given different colors to enable the programmers to give each a different "personality" or movement pattern. Top players could develop and memorize specific patterns to clear levels without losing lives. However, the ghosts prove an equal challenge if run on a random AI.

A sequel, Ms. Pac-Man, was even more popular than the original, and featured more complex mazes and randomized play. However, it wasn't actually an authorized sequel. It started life as a bootleg hack of the original Pac-Man called Crazy Otto, which feature the player character as a Pac-Man head with legs. GCC, who created that hack, thought this game could be successful and brought the game to Midway, Namco's American distributor. Midway was impressed and, together with the hackers, edited the sprites back into Pac-Man–style sprites and released it without the permission of Namco because Midway wanted a Pac-Man game out while Namco was readying Pac-Man's true sequel, Super Pac-Man. This made Ms. Pac-Man the most popular bootleg video game ever.

Pac-Man and Ms. Pac-Man were known for having lots of bootleg versions, many with altered mazes and graphics. They also had unofficial "speed-up kits" that, added to a legitimate machine, made the game faster and presumably harder.

The franchise continued through an endless array of sequels, including a pinball machine and lots of console adaptations. One of the most notable of these is Pac-Man Championship Edition, released for the Xbox Live Arcade and iPhone — notable because it is the only sequel to have been designed by Pac-Man's original creator, Tōru Iwatani. It is also a much faster, more intense game than the original Pac-Man, and was heralded as being "actually a video game now" by several gaming sites.

There's also a special version of the game, Pac-Man VS. for the Game Cube, designed by Shigeru Miyamoto and bundled with the Game Boy Advance link cable (as well as several other Namco games, and it was even given away for free at stores!). One of the few multiplayer entries in the series, the game allows up to three players to take control of the ghosts on the TV screen, while a fourth player controls Pac-Man himself on a linked Game Boy Advance, passing systems and controllers among one another between rounds. It also features Mario as an announcer, for some reason, and makes a great party game.

Another notable sequel is Pac-Man 2: The New Adventures, for the Sega Genesis and Super Nintendo Entertainment System. This game was an adventure game, except instead of controlling Pac-Man, you were an off-screen helper who suggested things to Pac (who had a mind of his own and was prone to moods which affected how he would respond), either by directing him to look in a general direction or by shooting things with a slingshot. You could also give him power pellets, of which you had only three but could find more around the levels. This game also included a full version of the original Pac-Man, and either Ms. Pac-Man (SNES) or the exclusive Pac-Man Jr. (Genesis). Pac-Man 2 was largely forgotten but still has a cult following.

Fun fact: It is one of the few games from the Golden Age to still make money in arcades in some form. Ms. Pac-Man, Galaga and Pac-Man were released as a multiple game arcade machine in 2001, with Pac-Man being hidden or not depending on the version of the machine. There is also a "Penny Falls" gambling machine called Pac-Man Ball that's notable for featuring a screen with a video game mechanic reminiscent of Puzzle Bobble. It actually pays out rather generously, so play it if you find one.

The game was originally released in Japan as "Puck-Man". It was changed for the North American release when marketing noticed how easy and tempting it would be to blot out a bit of the P to undesirably retitle the game. Either version of the name is based on the Japanese sound "paku-paku", for eating.

For the series' 30th anniversary, Google made a new version of the game using a custom map with their name on it. No, really, the map is their name. It's awesome to play, by the way (and the mechanics are scarily accurate to the arcade game, right down to the freaking Kill Screen).

A free version of Pac-Man was made available on the game's official website for the game's 40th anniversary.

See also Pac-Man Fever. For the trilogy of platform games based on Pac-Man, see Pac-Man World.

Not to be confused with Pikmin, which is a completely different video game altogether.

Tropes used in Pac-Man include:
Retrieved from "https://allthetropes.org/w/index.php?title=Pac-Man&oldid=1878562"
Categories:
Cookies help us deliver our services. By using our services, you agree to our use of cookies.