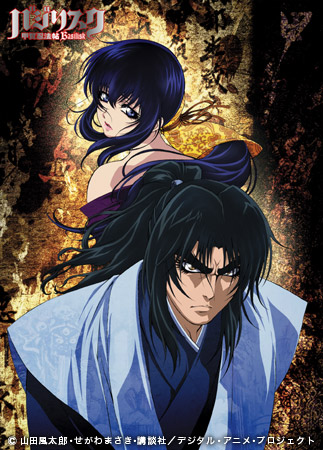 Romeo and Juliet, with ninjas and blood

The year is 1614. The Shougun Tokugawa Ieyasu is old and sick yet not senile, and war is about to erupt between the numerous noble factions that want to see one of his grandsons, either Takechiyo or Kunichiyo, as the heir. To settle this, each group will be represented by two very powerful Ninja sects, the Kouga Manjidani (chosen to support Kunichiyo) and the Iga Tsubagakure (chosen to fight for Takechiyo), who will "compete" for their cause. However, there is a BIG problem.

The heirs of each group, Kouga Gennosuke and Iga-no-Oboro, are... engaged. Have actually been for at least ten years. Unlike other arranged couples, though, they're very much in love and were very willing to tie the knot. And this engagement was settled many years ago specifically to bring peace among their clans, who have been bitter enemies for years. So, after the shaky truce is shattered, what will Oboro and Gennosuke do, as their warriors start fighting and killing each other with glee?

Fully titled Basilisk: The Kouga Ninja Scrolls, this manga was authored by Masaki Segawa and published by Kodansha in Japan in 2003 and 2004, based on a semi-historical novel by Futaro Yamada, published in 1958. The anime, produced in 2005 by GONZO Studios, closely follows the manga aside from a handful of distinctions. The manga itself also won the 2004 Kodansha Manga Award for general manga.

Tropes used in Basilisk include:
Retrieved from "https://allthetropes.org/w/index.php?title=Basilisk&oldid=1691014"
Categories: