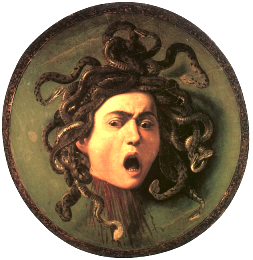 Medusa was a stone cold killer.

The Brown Note is a sensory input - usually a sound, image, or written work - that has an inherently harmful physical or psychological effect on anyone who hears/sees/reads it. This can range from wounding/killing someone, causing them to go insane, or become obsessed with it to the exclusion of all other things (including eating, drinking, sleeping, and yes, even troping). Usually, we don't get to see or hear it ourselves.

The Brown Note is named for the urban legend about an audio tone that, when played, causes the listener to lose control of their bowels and spontaneously defecate.

If it's not harmful itself, but summons or draws the attention of a harmful entity, then it's a Speak of the Devil. When it is specifically a book, it can be a Tome of Eldritch Lore or a form of Reality Writing Book. Musical examples are extreme cases of Hell Is That Noise, Ear Worm or possibly The Power of Rock. See also Magic Music. A lighter version used for torture would be Cool and Unusual Punishment. Can overlap with Suckiness Is Painful, when the note is a really bad work. It may occasionally serve as a type of MacGuffin.

Compare Words Can Break My Bones, some of which have similar effects given by single words, written or spoken, and are by magic. See also Weapons Grade Vocabulary if its simply straight words, spoken or read. Contrast with Gale Force Sound, where the sound has a physical effect, not a psychological one, and Incessant Music Madness, where repetitive music drives a person to distraction. If you aren't affected right off the bat, perhaps You Cannot Grasp the True Form or You Are Already Dead.

See also Loud of War, Make Me Wanna Shout and Musical Assassin for specific forms of sound-based attack. For a practical application in science fiction to showcase harmful energy sources, try Showing Off the Perilous Power Source. Compare and contrast Made of Evil.

Examples of Brown Note include:

Retrieved from "https://allthetropes.org/w/index.php?title=Brown_Note&oldid=1966481"
Categories:
Cookies help us deliver our services. By using our services, you agree to our use of cookies.