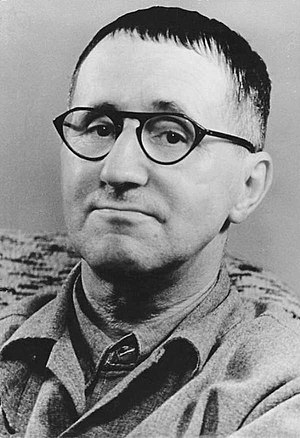 Bertolt [1] Brecht (1898 - 1956) was a German poet, playwright, novelist and director. He was possibly the most influential force in early 20th century political art, with a strong focus on communism (not Stalinism) and anti-fascism -- and probably most famous for The Threepenny Opera. He was a major figure in the art scene of the Weimar Republic and post-war Germany. Like many German artists, he fled Germany during World War Two. When he returned to communist East Berlin, he was granted his own theatre, where the current ensemble still performs his plays daily.

One of his most important principles was the Verfremdungseffekt, or "effect of alienation". This was a method which discouraged immersion and escapism, and encouraged critical reception. He alienated his audience to make them more curious and attentive. The goal of each of his works was to make the audience politically engaged, by encouraging them to apply the play's lessons to their own reality. His stories were not meant as escapist fiction, but as scathing caricatures of what was wrong in society. For this reason, he developed certain tricks to prevent escapism: he encouraged his audience to smoke while watching each play, discouraged method acting in his ensemble (he preferred using the classic, basic characters of the Commedia Dell'Arte), used off-key instruments, and made his props out of flimsy cardboard. In short, he was a master of Stylistic Suck.

Very few of his works have an explicit moral, instead relying on Applicability. His characters typically don't learn a thing, and end up perpetuating social repression and/or dying miserably. If a moral is stated at all, it's usually blatantly wrong. This way, Brecht encouraged his audience to make their own reality better than that of the characters, by learning from each story what the characters refuse to learn.

Typical features of his work include proud prostitutes, dead sailors, corrupt businessmen on the verge of bankruptcy, headstrong young women who are too headstrong to actually become independent in society, hopeful young soldiers who keep themselves blind to the real horrors of war, and what has been described as a genre of "water corpse poetry" (Wasserleichenpoesie) - imagery which has been enthusiastically adapted by authors as diverse as Bob Dylan, Lars von Trier and Alan Moore.

Considering himself a true communist, he stated that all art should belong to the people, to be constantly rewritten and re-interpreted as the political circumstances demanded. In practice, this meant that he refused to spend time even thinking about copyright, often drawing accusations of plagiarism. The reality of it was that he considered the circumstances in which a work of art was created more important than the source, and he actively encouraged others to adapt his works into new performances, without wanting credit for it.

While not particularly noted for being a wit, he did get some moments of snark in, most famously his criticism of the Stalinist track of East Germany post-war: "Would it not be be simpler / If the government simply dissolved the people / And elected another?"

Wrote a lot of plays.

Bertolt Brecht provides examples of the following tropes:
Retrieved from "https://allthetropes.org/w/index.php?title=Bertolt_Brecht&oldid=1818949"
Categories:
Cookies help us deliver our services. By using our services, you agree to our use of cookies.