Everything About Fiction You Never Wanted to Know.
Jump to navigation Jump to search
/wiki/Bob Dylancreator 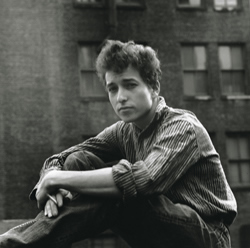 The most influential living songwriter in popular music, and an American cultural icon. Music critics refer to him by last name alone, and references to his life and career seem to pop up everywhere. That Other Wiki is a great place to learn the particulars, so we'll stick to the tropetacular.

Bob Dylan (1941-), born Robert Zimmerman (no, you can't call him that), moved from Minnesota to New York City at age nineteen with a guitar, some flannel shirts, and not much else. He performed folk songs in bohemian Greenwich Village coffee shops and bars with an affected accent, and became a fixture of the local "folk scene"—which doubled as a leftist political circle deeply interested in the Civil Rights Movement. Dylan wrote songs specifically for this group, the most famous being "Blowin' In The Wind" and "The Times They Are A-Changin'." Although these two "protest songs" are still his biggest claim to fame today — he's the guy who "brought politics" into music, somehow — this "topical" phase of his career lasted little more than twelve months.

In the summer 1965, he took the stage at the Newport Folk Festival with some rock musician buddies and an electric guitar. They plugged in, played very loud rock music with crazy-ass lyrics to some angry college kids, and thereby "went electric." It was not a popular decision at the time. His image from this period is the most enduring -- dark sunglasses indoors, a giant dome of frizzy hair, mod wardrobe, and baked as a Belgian waffle.

His most famous song from this "electric" period is "Like a Rolling Stone." Twice as long or loud as anything else on the radio at the time, with snarling lyrics about chrome horses and cat-loving diplomats, the song somehow rose to number two on the U.S. charts. This is about the time the Beatles were singing "Yesterday".

After a long world tour, full of combative press conferences and booing crowds, Dylan dropped off the radar in 1966, one year prior to the "Summer of Love". He did not perform at Woodstock (despite - or perhaps because of - the fact that it took place basically down the road from his house), he did not protest the Vietnam War. Bob Dylan closed out the Sixties via duet with Johnny Cash. He nonetheless remains synonymous with said decade's "turbulence": Jimi Hendrix's cover of "All Along the Watchtower" plays over about 70% of all Sixties montages.

The other major Bob Dylan reference you might encounter is to his "born again phase," which began with his conversion to Christianity in the late 70s. Attendant to this were a few nostalgic, audience-baiting tours and some angry but lyrically intricate Christian Rock albums. Dylan eventually returned to more secular themes, but has never quite abandoned the doomsaying street preacher point of view. On the other hand, in his personal life, he's been seen celebrating the High Holidays at various Chabad Lubavich Hasidic congregations; make of that what you will.

Dylan still records music, which people still don't really "get", and is once again sacrosanct among music critics and record store employees. As ever, this is mostly on the strength of his lyrics — Dylan was nominated for the Nobel Prize in Literature almost every year until 2016, when he finally received it (putting him into an exclusive group with George Bernard Shaw in having been awarded both a Nobel Prize and an Academy Award). Nonetheless, his nasal growl of a singing voice remains a point of contention among listeners. The stock Bob Dylan joke is that nobody can understand a word he says, and he is usually depicted as talking exactly as he sings.

Bob Dylan provides examples of the following tropes:
Retrieved from "https://allthetropes.org/w/index.php?title=Bob_Dylan&oldid=1850849"
Categories:
Cookies help us deliver our services. By using our services, you agree to our use of cookies.