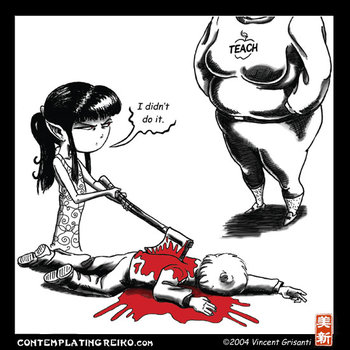 Circumstantial evidence, that's all you've got!

So one of the characters has a secret, one that they do not want leaking out. Unfortunately, Clark Kenting doesn't always cut it, and some aspect of the secret is going to be glaringly obvious no matter what. So they come up with a unique (and often humorous) excuse.

Similar to A Wizard Did It, but instead of hand-waving some implausible aspect of the series, the character is the one doing the hand-waving to another character.

In the ideal version of the trope, most people accept this because of their built-in Weirdness Censor, or because it's executed as a Seamless Spontaneous Lie. When it fails, you get That Liar Lies followed by Implausible Deniability. May or may not involve Hesitation Equals Dishonesty. Will almost inevitably accompany any Paper-Thin Disguise or Most Definitely Not a Villain. Often delivered by a Bad Liar. Suspiciously Specific Denial is a subtrope. See also From a Certain Point of View.

In Real Life, this is the most offensive form of turd polish.

Not to be confused with Sarcasm Mode.

Advertising? Wouldn't dream of it!

Neither Anime nor Manga exist here

Clearly Fan works are in a different section.

This is about Amateur Wrestling, Not the Professional Kind

Here There Be Dragons, Not Tabletop Games

Nothing Related To Theater

Video Games? It's A Lie, Just Like The Cake

Would You Believe There Are No Examples for Web Comics?

Everything In This Section Is Definitely Fiction, Not Real Life.

And there aren't enough examples from Politics and War to warrant a separate subpage for them.

There are definitely more examples after this, but we're out of categories.

Retrieved from "https://allthetropes.org/w/index.php?title=Blatant_Lies&oldid=1965732"
Categories:
Cookies help us deliver our services. By using our services, you agree to our use of cookies.