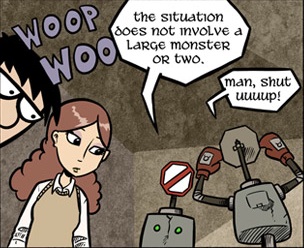 Sometimes, this is used more deliberately, such as when the speaker is trying to give out information that they shouldn't but doesn't want to be too obvious about it (Or So I Heard may follow). A Trickster type may also use it as the misdirecting component of a Batman Gambit, an Infraction Distraction, or Kansas City Shuffle; by making an oddly specific denial that is actually true, the mark may be led to believe that the denial is false. (For example: the mark is told that there aren't 2,300,009 invisible vampire ghosts—so the mark believes there are, when in fact there are no invisible vampire ghosts at all.) In rare cases, the speaker may be telling the truth and have no intent to deceive, but it just comes out wrong.

Oddly, it can happen in two opposite ways, with the same result: the specific denial ("I won't kill you using a poisoned stiletto!") was a lie (he does, and the fact that the question and/or answer was so specific means that someone already had the answer in mind), or the specific denial was technically true, but it left so many doors open that it was suspect anyway (he kills the other guy with a non-poisoned stiletto, or a gun). Bonus suspicion points if the statement was made apropos of nothing.

This is a favored tactic of a Tsundere who got caught being dere—in fact Memetic Mutation has made this the motto of the Tsundere ("Stupid [love interest]! I-it's not like I'm [doing something affectionate] because I like you or anything!")

When the speaker is assumed to be telling the truth, a listener might suspect this if the denial was expected to be more general.

When The Mafia uses it, it's the Legitimate Businessmen's Social Club. If you insist that you'd NEVER make a Suspiciously Specific Denial (while doing so), then it's I'll Never Tell You What I'm Telling You. This is not comparable to Bad Liar; a character who invokes this trope could certainly be a bad liar, but when used alone it's not indicative of Bad Liar.

Super Trope of Have I Mentioned I Am Sexually Active Today? and People's Republic of Tyranny.

Compare Nightmare Fuel Station Attendant, Saying Too Much and I Never Said It Was Poison.

These are certainly not examples:

Nothing General About It

Most Certainly Not Advertising

Definitely Not Anime and Manga

Has Nothing to Do with Fan Works

No Relation to Animated Films

You Couldn't be Joking

Who Said Anything About Newspaper Comics?

Bears No Likeness to Oral Tradition

Nothing To Do With Radio

Most Certainly not Recorded or Stand-up Comedy

Has No Resemblance to Theatre

Nothing to Do with Video Games

Anything But Web Comics

She goes on to explain why exactly it would be scientifically impractical, and that at most she could analyze Marten's genetic history. The room is very silent after this. (And they don't even know that she has just collected a sample of his blood).

Quite Unlike Web Original

No Western Animation At All

This isn't a Tropes page, we swear.

OH DEAR GOD, WHO DO WE THINK WE'RE KIDDING?!

Retrieved from "https://allthetropes.org/w/index.php?title=Suspiciously_Specific_Denial&oldid=1923564"
Categories:
Cookies help us deliver our services. By using our services, you agree to our use of cookies.