Everything About Fiction You Never Wanted to Know.
Jump to navigation Jump to search
/wiki/Cary Grantcreator 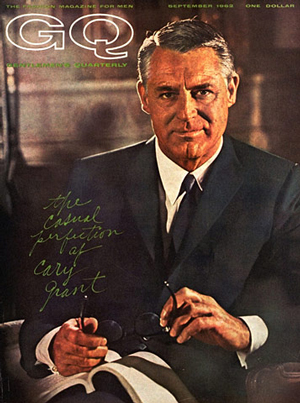 Archibald Alexander Leach (1904-1986) was a handsome and athletic, if fairly typical, English bloke. Following the bizarre (and quite literal) loss of his mother at an early age, he ran away from home and went into acting. After a stint touring Britain, he crossed the Atlantic to Broadway and from there ended up in Hollywood, which projected him onto the silver screen as Cary Grant, the 20th Century's epitome of suave sophistication.

In a career that spanned thirty years, some of his more famous films were the screwball comedies His Girl Friday, Arsenic and Old Lace and Bringing Up Baby, the comedy-soap opera The Philadelphia Story, and several collaborations with the director Alfred Hitchcock, most notably North by Northwest. He retired from acting in 1966, feeling, perhaps correctly, that as he aged the movie world was beginning to pass him by.

In 1970, he happily accepted an honorary Oscar for his body of work, but he never again appeared on-screen. In later years, he married a succession of beautiful younger women, experimented with LSD as a means of confronting his inner demons... and when a fan magazine sent a telegram reading HOW OLD CARY GRANT?, famously wrote in response OLD CARY GRANT FINE. HOW YOU?[1]

One of Grant's most famous (and easily imitated) characteristics was his rhythmic speech pattern, which his fans thought added to the air of sophistication of his characters. Ironically, he actually spoke that way to keep his working-class Bristol accent at bay. In the film Some Like It Hot, Tony Curtis did a riff on Grant's deliberate cadencing whenever his character pretended to be a millionaire playboy. Jack Lemmon's character confronted him on this with the line "where did you get that phony accent? No-bawdy tawks loik theht!"

Retrieved from "https://allthetropes.org/w/index.php?title=Cary_Grant&oldid=1367457"
Categories:
Cookies help us deliver our services. By using our services, you agree to our use of cookies.