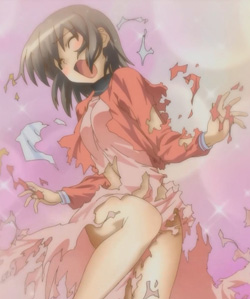 A variety of Fan Service provided by damaging a character's clothing in such a way as to provide teasing glimpses of the flesh or lingerie beneath.

Female characters tend to fall victim to this, converting their usual costumes into something more Stripperiffic. A male action hero might instead simply lose the shirt altogether for a Shirtless Scene.

Can induce You Must Be Cold or Defeat by Modesty. See also Action Dress Rip and Battle Strip. For the non-combat version, see Wardrobe Malfunction. Kicking Ass in All Her Finery is not immune to this (but it's not common).

The Nudifier is typically a weapon which has no other effect than this. Hat Damage is a non-Fanservice Sub-Trope. See also Magic Pants, which is often combined with this trope despite also being its inverse: no matter how much clothing damage they take, they still have enough threads left over to cover the naughty bits.

Examples of Clothing Damage are listed on these subpages:
Retrieved from "https://allthetropes.org/w/index.php?title=Clothing_Damage&oldid=1836273"
Categories:
Cookies help us deliver our services. By using our services, you agree to our use of cookies.