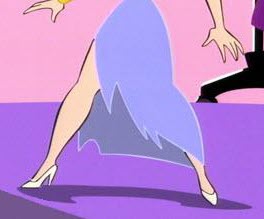 Show Some Leg: CHECK, Ass Kicking: IN PROGRESS! Shame about the dress though.

Sometimes an Action Girl wears dresses, but finds a dress (unlike a Magic Skirt) to be restraining when action arises at the most inopportune moment. This will result in said woman tearing the hem of her dress in order to give her knees the ability to move and efficiently run. She may or may not remember to ditch the high heels, though.

Some Fan Service occurs, as this is a combination of Clothing Damage and She's Got Legs.

A minor form of Battle Strip.

Compare Rip Tailoring (a non-action version), Mini-Dress of Power, From Dress to Dressing.

Examples of Action Dress Rip include:

Retrieved from "https://allthetropes.org/w/index.php?title=Action_Dress_Rip&oldid=1780172"
Categories:
Cookies help us deliver our services. By using our services, you agree to our use of cookies.