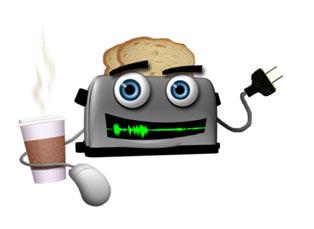 We don't make movies, we make them funny!

Years after Mystery Science Theater 3000 went off the air, show head writer/star/novelist Mike Nelson decided to try and make money off of the franchise that made him famous via bringing back the whole concept of riffing on bad movies -- but with a twist. Using the format of a podcast, Nelson now riffs on big budget blockbusters that studios would never ever let people like Mike make fun of. Hence Rifftrax was born.

Rifftrax is a website where you can buy (for $3-5 a file) audio MP3s of Mike Nelson (and occasionally others) making fun of big budget blockbusters such as Batman and Robin and the Star Wars Prequel Trilogy. Of course, you need to actually own or rent copies of the movies too, since the audio file only contains Mike's witty commentary on the films. (Rifftrax also releases riffs of educational shorts from the public domain, along with the occasional public domain feature; these include video files.)

Synchronizing the video to the riff is explained on the website in detail. There are generally two ways to go about it: either use the special Windows software to synchronize the riff with your DVD, or to play the MP3 and DVD separately with whatever you have on hand. Throughout the riff, a robotic voice called Disembaudio, visually depicted as a robotic toaster as seen in the Trope Image, recited lines from the DVD for reference. If the DVD and Disembaudio say the line simultaneously, you're in sync. Otherwise, pause whichever one is ahead.

Since starting Rifftrax, Mike Nelson has been joined by several ex-Mystery Science Theater 3000 loyalists (Kevin Murphy and Bill Corbett, aka the second voices of Tom Servo and Crow on Mystery Science Theater 3000) in his business. Guest stars such as Neil Patrick Harris, Chad Vader, Weird Al Yankovic, and Rich "Lowtax" Kyanka have also appeared. Disembaudio will also chime in now and then to crack a joke.

The concept was preceded by a brief series called "The Film Crew", in which Mike, Kevin, and Bill played themselves and were part of a Framing Device similar to Mystery Science Theater 3000, but much more mundane: they were working in the industry and tasked by their boss, Bob Honcho, to provide commentary on bad movies. A combination of Jim Mallon (owner of the Mystery Science Theater 3000 franchise) delaying release alongside Mystery Science Theater 3000 DVDs and budget costs in comparison to Rifftrax torpedoed that project, but Rifftrax lives on and has even inspired original show host and series creator Joel Hodgson to get in on the act and create his own spin-off, Cinematic Titanic...

The site can be found here.

They recently added a program that lets users send in their riffs and Rifftraxs then sells them and shares the money with the users. This program is called iRiffs.

Retrieved from "https://allthetropes.org/w/index.php?title=Riff_Trax&oldid=1861303"
Categories:
Cookies help us deliver our services. By using our services, you agree to our use of cookies.