Everything About Fiction You Never Wanted to Know.
Jump to navigation Jump to search
/wiki/Feedercreator 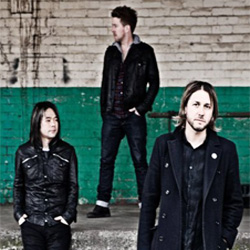 Feeder are a 3 piece British alternative rock band, consisting of Grant Nicholas on guitar and vocals, Taka Hirose on bass and Karl Brazil on drums. Past members have been their founding member, Jon Lee, who committed suicide in 2001, and Skunk Anansie drummer, Mark Richardson, who left in 2009 due to Skunk reforming and band differences.

The band, originally named 'Reel', went though quite a few name changes. The band first started as 'Temper Temper', a electro duo formed when Grant and Jon first met in their hometown of Newport, Wales during their teenage years. The duo became a full band called 'Rain Dance' but when both of these acts failed to find record deals, they formed a three piece band called 'Real'. The name was then changed to 'Reel' when they fired the bassist and found Taka Hirose, who placed an advert in a local paper, stating he was a bassist looking for a band. Finally, they changed their name to 'Feeder', after Grant's pet goldfish at the time. In 2010 they changed their name to 'Renegades', and did a miniature tour of the UK under this name, before settling back to the normal band name.

In 2001, Jon Lee committed suicide in his Miami home; the band were about to call it quits until Jon's family urged them to continue. They were joined by Mark Richardson, Skunk Anansie's drummer, who went on to leave the band and return to Skunk in 2009, being replaced by Karl Brazil.