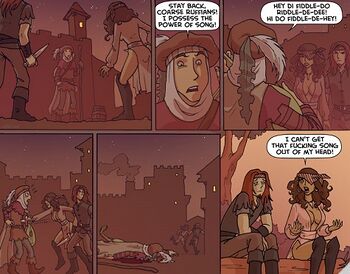 Poodle Poking at its cruelest.

Ear Worms (from the German phrase Ohrwurm) are those songs that weasel their way into your head like uninvited guests and then proceed to stink up the inside of your cranium by playing themselves there over. And over. And over. And over. They're those songs that just get stuck in your head, and no amount of screaming, pounding, protesting, and banging your head into your desk will get them out. They will check out any time you like, but they will never leave. Someone infected with an Ear Worm may find themselves prone to bursting out into the song in inappropriate places, tugging at their ears in fury, and can end up distracted in the middle of conversation (or other important activities) by the continuous snatches of song wavering between their ears. And it's only a matter of time before, like Darryl Revok, they drill a hole in their forehead to let the voices out.

You may find relief by hunting down the lyrics and learning the words, but this is more effort than most people are willing to expend on a briefly-heard ditty. Worse, if the song is in a language you don't speak, this becomes pretty much impossible. And when the song is an Instrumental Theme Tune... Some people also claim that just listening to the song in question from beginning to end could help, because as their theory goes, an Ear Worm really is a fragment of the song stuck in your head, while your mind attempts to resolve how it continues—in vain. Actual success of this method varies (from person to person and from song to song) though, so it might only serve as a temporary release or none at all. And even worse is the fact that some Ear Worms are songs that were made cyclic to begin with (say, video game soundtracks). Therefore, listening the song through will just complete the loop, rendering the Worm Nigh Invulnerable. Naturally, you can always distract yourself with another Ear Worm, but you might find it just as annoying as the first, and some people even develop a "playlist of Ear Worms" this way, being able to switch from one song to the other, but unable to silence them. As a general rule of thumb one could say: The more you care, the worse it gets.

The Internet is a particularly notorious supplier of Ear Worms; lots of music memes tend to be irrationally catchy. (This is probably how they got to be memetic in the first place.) Other prime offenders include commercial jingles, Broadway musicals, whatever Top 40 hit is being overplayed right now, video game music(including licensed music), and songs with chipmunk voice. Let's not go into show theme music, especially when they repeat and shout the name of the series over and over and over again.

In fiction, Ear Worms are frequently the tool used to produce Psychic Static. Especially powerful ones can also serve as a Brown Note.

Not to be confused with the mind-warping parasites from Star Trek II the Wrath of Khan.

All The Tropes would like to apologize to any readers susceptible to these things who, getting reminded of a song on this page, feel compelled to hear it again. For your convenience and further suffering, links will be provided whenever possible. (And sometimes this isn't possible, for various reasons; if you find a broken link, please remove it or fix it. Thanks!)

Some of these link to YouTube, so if you wish to listen to them in stereo, add "&fmt=18" to the link without the quotation marks. This may negate some of the awesome, but in some cases it may also elevate the song to godlike status.

Note: When posting links to YouTube here, make sure to strip their URLs of all unnecessary fragments—the "?v=oHg5SJYRHA0 or whatever" parameter is the only one needed, really.

Also, unless it seems to have been posted with the copyright holder's blessing (look for one of those little marks like "director video" or "contains content from") or songs released under free license (e.g. Creative Commons), it probably shouldn't be linked here—it's very likely to be taken down. And also, for US users, the rest of the world may not see what you do. Links to video game soundtracks and demoscene productions are OK most of the time, though.

Please mention the work the example comes from. Simply typing out "Lalalalala (link to Youtube video)" will not be a good idea, because a) the link might get deleted, b) not everyone can play videos, and c) "Lalalalala" looks like gibberish to the average viewer.

Important Note: Examples of Ear Worms go into one of the sub-pages below. Do not put them on the main page.

Ha! Now we've got you singing it! And if your mind is completely silent, that just means you have 4'33" as an ear worm!

Retrieved from "https://allthetropes.org/w/index.php?title=Ear_Worm&oldid=1961509"
Categories:
Cookies help us deliver our services. By using our services, you agree to our use of cookies.