Everything About Fiction You Never Wanted to Know.
(Redirected from Shout-Out)
Jump to navigation Jump to search 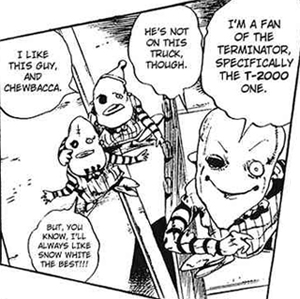 By the way, the name of the power that brought them to life is called Bohemian Rhapsody

A Shout-Out is something subtle (a name, line of dialogue, or prop) in a show that refers to fans or family members of the cast or crew, or to another source of inspiration. By nature, these can be obscure for casual fans. In English class, it is known by the more proper-sounding name, an allusion.

However, remember that many tropes, symbols, and such are older than they look and can, often, arise in parallel. So despite (or because of) the ubiquitous nature of some creative properties that doesn't mean that anything that seems somewhat similar is referencing said work.

Reference Overdosed is when a series is loaded with these.

Giving references to other works can predate to older times but became increasingly common in medieval times. In modern times, almost every larger film, Video Game and so on intentionally references some other work, making the phenomenon nearly omnipresent.

See also Homage, Stock Shout-Outs, Opening Shout-Out, Shout-Out Theme Naming. Literary Allusion Title is a subtrope. Easily confused with a Mythology Gag and Continuity Nod, and may overlap with Actor Allusion. Contrast Take That, which is a negative-spirited Shout-Out.

See Stock Shout-Outs for a list of Shout-Outs and other references common enough to earn their own page.

Remember, a Shout-Out is intentional.[1] If a character just happened to use a similar turn of phrase to another work, that's just a coincidence.

Shout-Outs that still need to be moved off of this page:

Every Shout-Out is made by somebody in Real Life. These examples need to be sorted and moved to the appropriate subpages.

The following 5 files are in this category, out of 5 total.

Retrieved from "https://allthetropes.org/w/index.php?title=Category:Shout-Out&oldid=1933235"
Categories:
Cookies help us deliver our services. By using our services, you agree to our use of cookies.