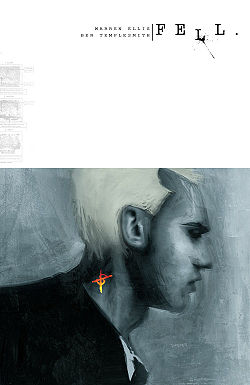 "You hear that? Every time you take one... I'm going to take one back."

One day, Warren Ellis thought to himself that comic books were, comparably, a pretty expensive hobby. Spend the same amount of money on a movie or book, and not only would you be entertained for a longer period of time, but you'd get a whole story arc, to boot.

Picking up artist Ben Templesmith, fresh from an exhausting run on 30 Days of Night, Ellis proposed finishing a complete story arc in every issue, aided by a nine-panel format.

Fell is a Police Procedural centering around a detective who transfers to the slum-like Snowtown, a so-called "feral city" - largely lacking an organized government providing such things as running water or child protection services, populated by drug dealers, murderers, psychopaths, man-eating packs of de-domesticated dogs and one crazy nun. There, he must deal with a Crapsack World of Black and Gray Morality.

Templesmith's murky and unsettling art lends a complementary mood to the Darker and Edgier comic. However, Detective Fell is not an Anti-Hero, nor does he fail to gain the reader's sympathy. The dark themes in the comic tend to be less epic and more subdued.

Fan reaction to Fell has been largely positive, not in the least due to an appreciation of Ellis' desire to keep prices down but still deliver a complete story with good art, and not resorting to cliffhangers or slow pacing to increase profits.

Tropes used in Fell include:

I find the internet very exciting.